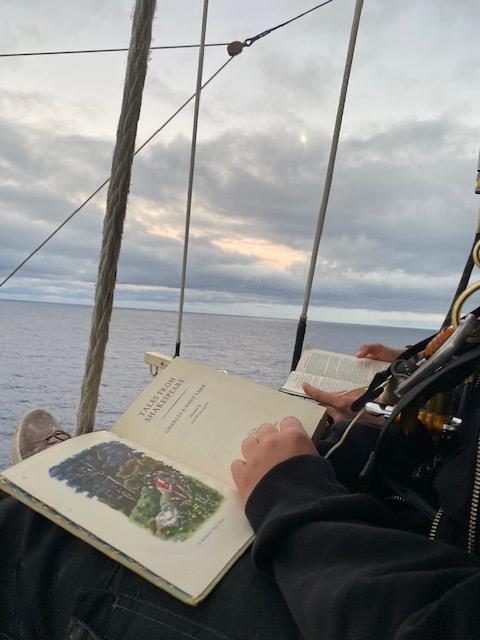 A moon or the stars?

I can never decide what enchants me the most. The moon dashing its cold light out in the night, reflecting on the smooth waves of the ocean. Or the stars, an infinity of sparkling dots characterizing the dark of the night. Both made me breathless and welcomed me up on deck when I started my day at midnight.

During this night watch I was one of three guard posts which means I rotated between steering, holding watch out for boats and being a lifeguard. It happened when I was standing watch out. Cooling breezes from the big blue beyond was playing with my hair and above my head the stars, created patterns with inspiration from eternity. Suddenly, shouts drew my attention away from the horizon. On main deck the working crew was taking down sails. Usually, as a post you´re not supposed to help the working crew however now was the first time that we got to work with sailing in a very long time because of no wind. I just couldn’t stand still. My first mate saw the excitement in my eyes. A kind smile reached my eyes, but even better words reached my ears. He told me he would cover for my post and seconds later I was on deck to help haul all the ropes.

There´re few moments in life when everything feels unreal. When you just want to pause time, close your eyes, and let the warmth the moment creates in your body take over. Emagine standing together with your friends. You´ve just won against all the ropes and sails. Everyone frowns exhausted but still you enjoy it because you´ve fought together in a battle over rolling waves and under the night sky.

These moments are rare however, two more found me today. The first revealed itself when it was time for “VM in OS”. In other words, we were to compete in competitions we didn’t know exist, for instance, run around the naval cabin or haul a giant rope. Even though we were divided in teams the hole class´s team spirit was incredible. We ended the games with a chocolate cake on deck under the gazing of sunlight. And then, what we all had been waiting for, a bathstop…

This evening the last sunset out at se was ahead of us and what could you possible do to capture such a moment? We had an idea that no one we knew had ever tried before and when the suns now golden light went down to kiss the horizon, we climbed up the rig. We sat down 25 meters up in the air and from here we could touch both the stars and the oceans eternity at once. But most important, we had brought our books. I can´t remember how long we sat there, in our three different dreams and worlds. All I remember is the sun set and the moon rise once again. All I remember is that this was another incredible moment.