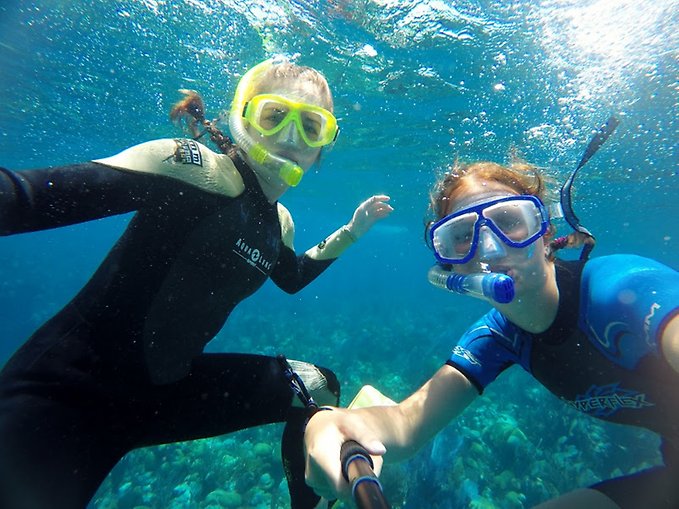 A MOUTH FULL OFF SALT

You have to breath slowly through your mouth and not panic,.It´s irritating when the water comes into the snorkel and you get it in your throat, or if the water comes into your glass and then you have to remake it´s position and take out the water. Yeah it doesn't sound like something to get nervous about, but for me who is an unexperienced snorkeler it was both scary and exciting at the same time! And wow... I have no words! You can´t really believe it yourself. I felt like I was a mermaid.

Today was no ordinary day. Today it was Snorkling- day for the nature-science students and I could truly say, WHAT A MAGICAL DAY IT HAS BEEN!! I know that many of us students, me included, had been really looking forward to it and we were not disappointed.

The morning was no different from the other mornings we have at harbor. We were woken up, we ate breakfast - for me it was porridge with cinnamon and milk, I actually eat that every morning - we lined up at 8.00 pm there the captain gave us todays information and our teacher gave us todays schedule. The marine-students had no plans for today so they were allowed to plan a whole day of their own, which I heard was also pretty great. The nature-students were then going to snorkel with some help from ”BIOS institute of Marine-science”, they also hold a lecture about organisms in the ocean before we went out. Badly enough didn't I listen so much while the lecture were held. Don´t get me wrong the lecture was great (from the little that I heard) but they did the mistake before the lecture had started to give us the wi-fi code to the institute´s internet. So I took the time to talk to my friends and family instead and I must say it was worth it, with it being rude to the person who was holding in the lecture. I love every moment of being on Gunilla and get to experience all this, but you have those moments when you just need a hug from your family… and because of all the miles that is between us from doing that, a call with face-time has to be enough. But it´s not the same thing. At least I have my friends and they are the best!! And now we will continue with the rest of the day.

So after the lecture we were almost ready to go snorkel, but before that they also gave us a tour to their laboratory where they do most of their studying of organisms. It was nothing special, if you ask me. It looked like an ordinary classroom but with a lot of microscopes. We also ate some lunch, that we got from the boat, and ate it before we went to the reefs.

The 40 minutes ride to the place we were going to snorkel on, were really nice but also bumpy. It jumped up and down on every single wave that it crossed over. The coastline we went by was amazing! It was either long and beautiful beaches or huge rocks building up like a front, and almost everywhere you could see such fantastic houses. You could see everything from huge and beautiful mansions or small cosy and colorful buildings, and not to mention the water! I could never had thought that water could be so blue and clear. Of course you have seen pictures and everything on the internet, but it is so much better in real life. You can´t compare!

Everybody was anxious to get into the water when we arrived to our planned location. I was actually a bit nervous about the snorkeling part. Things to think about while you do it. Like that you have to breath slow through your mouth and not panic, it´s irritating when the water comes into the snorkel and you get it in your throat, or if the water comes into your glass and then you have to remake it´s position and take out the water.. yeah it doesn't sound like something to get nervous about, but for me who is an unexperienced snorkeler it was both scary and exciting at the same time! And wow.. I have no words! You can´t really believe it yourself. I felt like I was a mermaid. You know, swimming with the fishes, paddling threw the water with your swimming feet, floating on the waves. For me the best part was when you were diving down in the water. Everything goes quiet, you are surrounded of all these fishes and beautiful coral reefs. It is only you down there and in that moment you think that you are at a magical place. I have said it before and I say it again, you can´t really describe it! We had so much fun and I´m sad for the marine-students who didn’t get to see it! A perfect day that I would gladly do again if I get the chance!

We were back at the boat 4 pm and we actually had some time left that day before we had to be back on boat so we ran to the showers, just to get the saltwater of the skin and then went back to land. That evening we spent our time at Bermudas main capital, which was pretty nice! All of us was starving after snorkeling all day so the first thing we did was too look after a nice place to eat at. And we find a really cosy out-serving restaurant and they sold hamburgers with fries so I was sold! The food was okay, it was the people and the surrounding that made it great!

My time here at Bermuda have learned me one thing; that I definitely will be back here some day!