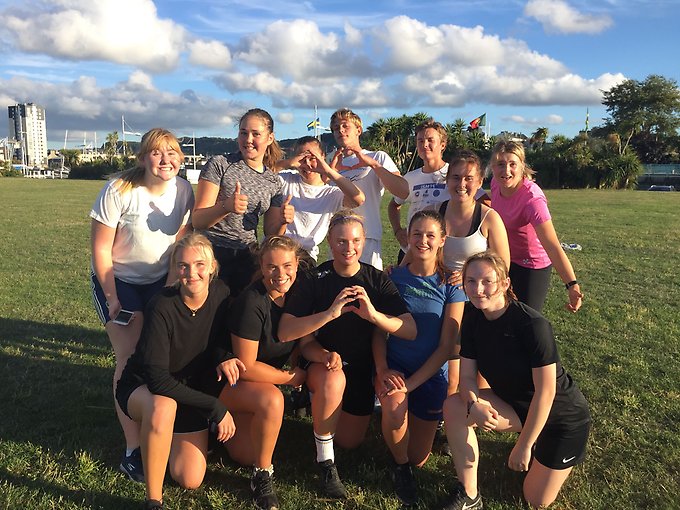 Hello from Cherbourg! Today the port watch woke up to a really cold weather and the sound of the engine, which meant no hard work for us. Instead we enjoyed our last moments with Harry by playing Swedish ballads on the quarterdeck.

Before we went off watch we sang a song and read a poem that we wrote a few minutes before to our dear watch leader and first officer. Due to the bad rehearsal, which we always seem to have, the performance consisted mostly of laughter.

As usual I was trying to be effective after the watch, but it ended up with a ”five” minute nap, that lasted two hours. When I woke up I saw the beautiful view of Cherbourg`s harbor which is in the centre of the city. Just by walking a few steps we`re in the old town with some genuine cafés and a magnificent theater. We wanted to see as much of the city as possible so we kept on strolling until we needed a snack break. Of course we had to try some typical French food so we bought ”pain au chocolate, croissants, des baguettes, macarons, des crêpes and café au lait”. In general it seems as if people don`t speak much English in this town but luckily for us we had some French speaking students in our group. Me, Zelda, Elsa G, Julia P, Felicia, Tova, Stella, Klara, Svea and Ella sat by one of the many fountains and enjoyed the cheap delicious French pastries.

By half past six we had to be back on the boat for the football tournament. Although we we´re on the other side of the city it only took us fifteen minutes to walk back to the boat. The whole class and some command stood on the pier and listened to the final countdown. The music got us all hyped up for the upcoming matches. All the teams were mixed so that we could get some time with the other watch members too. Through the whole tournament the score was very even, which lead to an exciting final. The crew team who won last year was very confident but sadly they lost before the finals this time. Maybe it was because of the hard tackles from Elsa G and Frans who made them lose. After fifteen hard minutes my team and team four held the score one to one but team four had more goals fro previous matches which lead them to a well earned victory. To finish off this good evening we did a video of all of us standing like a national team.