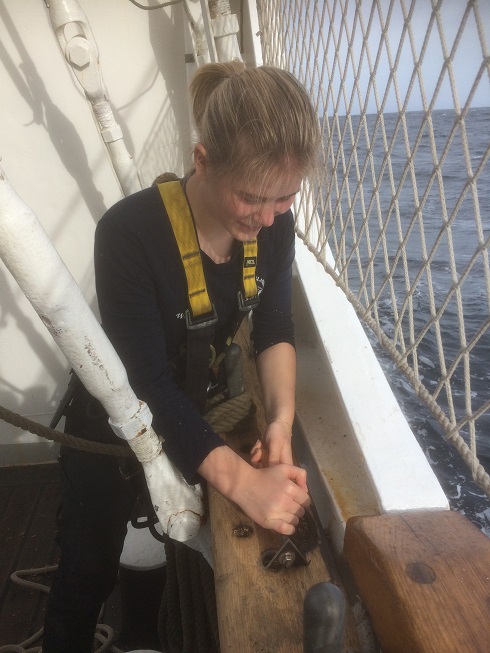 Another Beautiful Day at Gunilla

Hello family, friends and you who just are interested in what we are doing here on Gunilla. I can honestly say that we are doing a lot. If it isn’t setting sails, climb in the rig or bowes down in rope’s end it is maintenance work in different kinds.

Today is the fourth day at sea on the second sea leg and we have really gotten used to not being able to se land. It’s much more fun now when you understand more and know what we are doing, most of the time. And a very positive thing is that it seems like everyone feels better. Much fewer people are seasick and more people have more energy. It feels like everyone is in a better mood. Now when we “know” how to sail we have started with maintenance work. For about three days we have scraped the pinrail for hours but somehow it still is satisfying. We are removing rust and climbing down in small holes to remove water from “the death” (a small rom in the front of the boat).

At twelve o’clock it was time for watch again. It has become a routine to get roused in the middle of the night, bowes down in some ropes, learn their names, get a little panic in the rig, sing some songs and then go to bed again at four o´clock in the morning. Then we get roused again at around eleven-thirty for lunch and then it’s time for another watch. All other time of the day goes to studying and eating which feels like we do constantly. Then it’s good we have a talented chef. Today we got the best meals yet!! Cesar salad to lunch when we woke up and noodle wok for dinner. It was so delicious that I ate three portions just because I could.

The night watch was special!! It was very cozy!! We usually practice setting and dowsing sails and learning more ropes, but this watch we also watched a movie. Is was a movie black and white about a tall-ship which sailed around south Americas southern point. The best thing was that we got to watch it on the jib. It’s a big sail in the front of the boat and we used it as a movie screen. It was awesome and the movie was really good. It was almost better than the cinema, except for the fact we didn’t have popcorn.

Now it’s time to go to bed and sleep for about three hours before out last night watch before we arrive at Cabo Verde.

Goodnight from Gunilla and Nell Waller.