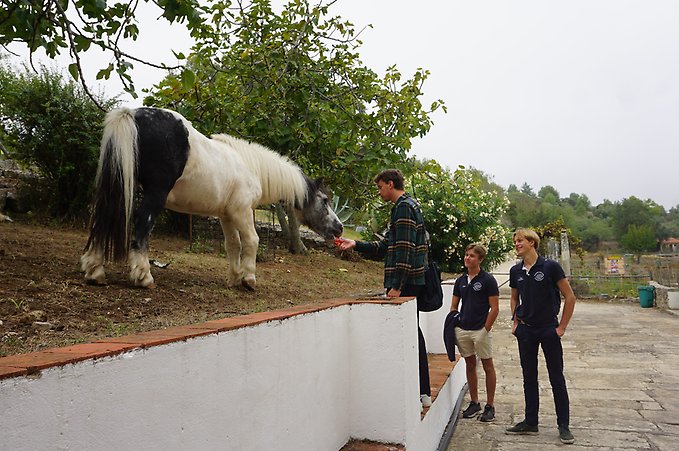 A pony and some goats

Another wonderful day in Lisbon has come to an end. As the sun sets a slight shimmer of gold colors the typical harbor-water. Even though it’s insanely beautiful, all I can think of is the donkey.

Two weeks from now we sit on the plane home. I have mixed feelings about the short amount of time we have left. I’m starting to get separation anxiety and now it’s hard to imagine how life will be back home. At the same time people are starting to get annoyed with each other and everyone is just tired nowadays. When you start to think about sleeping in your own bed, the possibility to go to a Swedish supermarket and be able to be alone, home sounds kind of nice. Then you think of the one and a half year gap until next trip with T/S Gunilla, and the separation anxiety gets right back at you. To not think about it at all would probably be the best way to handle the situation.

Today we visited Oeiras International School which is located outside Lisbon. They were really open and welcomed us with some traditional Portuguese sweets as we got showed around the school. The school is built on a farm and the best part is that they have animals. Our first sight as we got off the bus was a bunch of goats. When we got showed around it appears that they also have a pony, a donkey and some chickens. We asked why and they answered that they contribute to a good atmosphere which was followed up with the question: why does our school ´have´ a ship? I guess it makes it fair. The donkey might be the cutest thing I’ve seen on the trip so far. I mean imagine having a donkey walk around! I’ll try to convince our principal. Later we played football, basketball and volley-ball together. I took the risk and joined the football squad with some other brave swedes. It was such a fun match but we don’t even have to discuss the skill differences. I mean… they’re Portuguese. It’s in their blood. Sadly we couldn’t take them with us to the ship as the security wouldn’t let us. So after we ate lunch together we went home and starboard and midships had theday to do what they want.

I’m really thankful for the visit at Oeiras. Hopefully Gunilla will go back there next year. They did not only have good views and opinions that we used in our assignments, they were also very nice and they have an amazing culture. It’s always interesting to meet people at our age and discuss the differences and the similarities between our lifestyles.