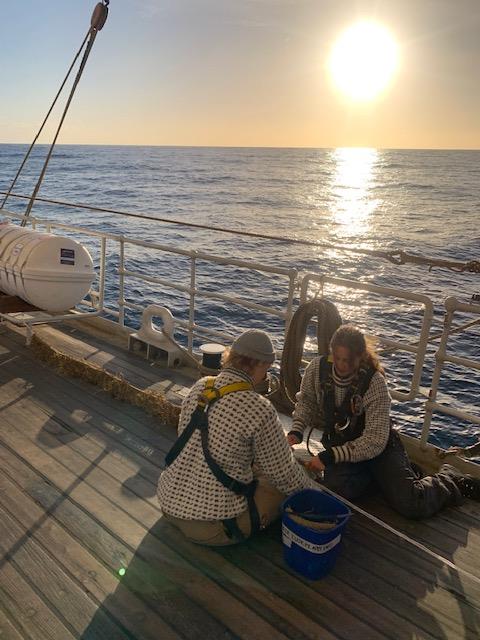 A pretty normal day at sea

Today has been a pretty long day. The watch I work in right now has to work between 8 and 12 so I woke up at 7 o’clock as I do every day.

Today I didn’t really want to get out of my bed, but I did, as we always need to do because of our watch at 8 o’clock. Something I really like is that you get to eat breakfast before the watch and that makes it easier to get motivation to get up and also you get the energy and the strength you need for the watch. Fortunately I realised that I was going to work as post today so I got a little bit excited because I haven’t worked as post until now on this sea leg. Working as a post means that you in practice stand still and don’t need to do that much. There is three different posts in the post job. Lifebuoy guard which means that you have an eye on everybody that comes on deck and makes sure so nobody falls in the sea. Helmsmen is also a post there you steer the ship and take orders from the captain which course you should hold. I really like being helmsman because you get a pretty powerful felling while you are standing there at the helm watching the other ones work while you kind of are in charge, which you aren’t but whatever. And last but not least, look out. When you work as look out you stand in the front of the ship and report to the captain if you see any ships or other obstacles in the water that shouldn’t be there.

The post started at 8 o’clock as said and it went kind of fast, you really get time to “relax” and think when you work as post which I enjoy a lot. After the watch we ate meat soup and had lessons to 5 o’clock.

Before the next watch I was able to sleep a bit and take a shower.

The watch was not that great, I was still tired even if I got to sleep a bit. But I guess life is life.

When we were finished with the watch I took a cup of tea together with my roommate Erik, which have gotten to a tradition after the night watch. The day was getting to an end. I got to bed and slept.