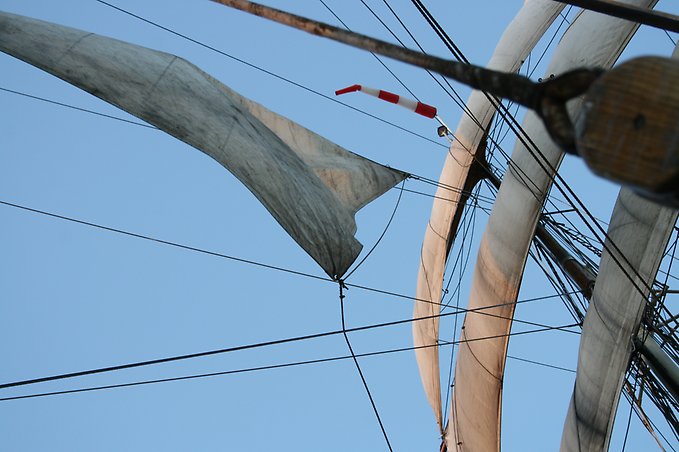 I got woken up at 05.40 with fifteen minuites until line up, I figured I had plenty of time and played with my phone for a few minuites before realising that I may not have had as much time as I thought.

The watch began and we had a lot to deal with since we were supposed to be docked at the harbor in just two hours and right now we were anchored way off. We got some breef instructions about preparing the ropes which attach us to the shore to prevent us from drifting away. It was finally time to raise the anchor, it was actually my first time. We got some duties although the students from the sea program had to do most of the work since it is a part of their education.

After some struggle with the anchor were we finally on our way to the shore and other students began to turn up one by one. The docking went well and we were finally allowed to eat breakfeast. We had permisson to go into shore after breakfeast and so we did. We went straight to the trainstation and took the fastest train to London. After 2 hours travel by train were we really excited to see London.

London was great and we did alot of shopping, my friend had a list of places to go so we just ran around in the center of London from store to store in a hurry to visit everything. The weather was great and it almost felt like Miami all over again, not a cloud on the sky and the sun shining straight at you. After a while did we decide to take a drink and get some time to catch our breath. Afterwards did we go to a Victoria secret store which was huge and somehow I managed to bring out a shirt for my sister through all that caos. Now we were exhausted and started to aim for the train back home. We stopped to see Big Ben and then London eye on our way back. At the
trainstation we had to wait a while so I allowed myself to buy one of those fidget spinners. If I'm not mistaken so has these small spinners that are supposed to releave stress become pretty famous back home during our journey.

We arrived back in Portsmouth after two hours of a less stressfull travel by train and started looking for somewhere to eat. When we finally found a place to eat and made our order we realised that we would be quite short on time. We had the luck on our side because som of the watchleaders were eating their dinner at the same place. When they saw us stresseating they gave us permission to arrive a few minuites late and we could enjoy our dinner.