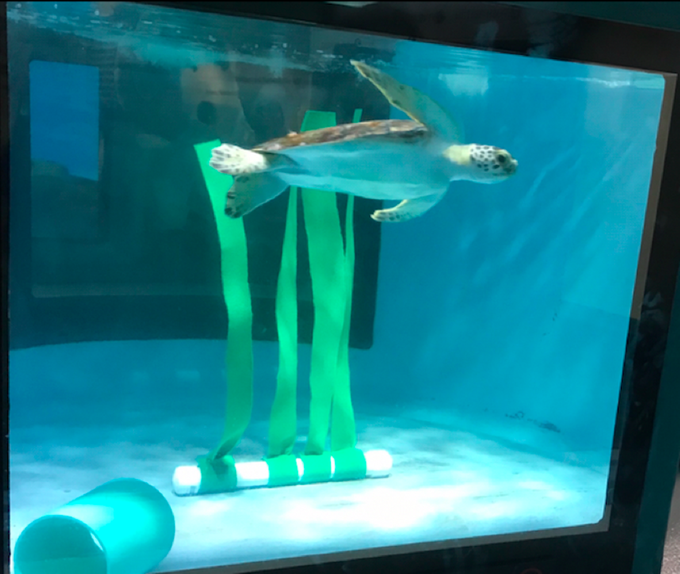 For me, and my fellow mates in starboard, the day was spent on the ship, since it was our day of watch. Meanwhile, everyone in port and midships had the day off, or at least most of the day. At noon all of us went to an aquarium, where we had an encounter with Zazu - a rescued sea turtle, among other animals.

The day started as any other day; we woke up, had breakfast and had line up (uppställning). Then, port and midships had an hour-long lesson before they were allowed to do whatever they wanted. After the lesson, most of them explored the city by foot, took the bus to an outlet, studied or just relaxed in the sun at some café.

Meanwhile, starboard had watch. We got to do some maintenance work in the rigg, such as putting lubricating grease on the wires. We also had to clean different areas on the ship, wash all the harnesses as well as paint different things. The helpers in the galley got to peel several yellow/brown bananas and then put them in the freezer, as the first step in order to make them into ice cream, since nobody found them alluring to eat.

We had lunch at 12 am and then we set off toward the aquarium. When we arrived, we got split into two groups; one were allowed to walk around and look at all the animals while the other group got showed around by a staff member. After about half an hour the groups switched places.

There were a lot of cute and interesting animals at the aquarium, such as utters, different species of fish, sea turtles named after Harry Potter and The Lion King characters, different types of sharks as well as stingrays and snakes. They were all very beautiful although the size of their cages/tanks were a bit alarming. Zazu, for instance, had a very small and unwelcoming tank.

We got back to Gunilla around 3 pm. I, and the other two who helped out in the galley this day, were put to work straight away. Since the chefs had decided to have tacos for dinner we had to chop vegetables and fruits for what felt like hours. We were all very tired after a long day of watch and sightseeing but it all went away once we began eating - it was so delicious.

We have all had a really great day and hope you have had one as well.