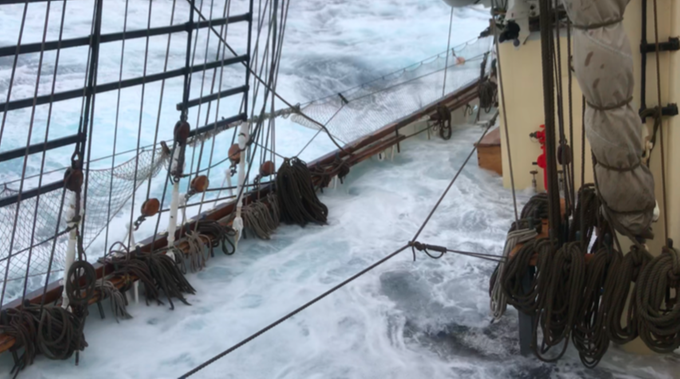 Today I woke up by the sound of powerful waves coming from my right hand side and I felt how the ship was moving back and forth. I got out of bed, put my sundress on and brushed my teeth. On my way out from my room a big wave made me fall into a door, which opened and I fell down to the floor. When I looked up, I had fallen into my classmates’s room and on my way down I had turned the lights on. What a wonderful start of the day!

Actually I do not mind how the day began, because I did not get hurt. I just laughed but my friends were a bit shocked, since they were asleep and woke up when this happened. I continued up to the kitchen, where they were preparing some food, and saw how glasses and bottles of orange juice fell down to the floor. When I went out on deck I quickly understood that a sundress was not the best choice of clothing. It was rainy and windy, even though the temperature was still high. They told me that they had been through a thunderstorm and that a lot of people were seasick.

On deck we saw a tornado, but luckily we did not get into it. It was a cool sight though! A lot of people came up on deck to take a picture of it. Today we have had our most windy and wavy day so far. The waves were bigger than ever before and there was a lot of water on deck. Some people have been enjoying this weather, and some have not. In my opinion, it was a nice and interesting experience, but I really hope tomorrow will be sunnier and less windy.