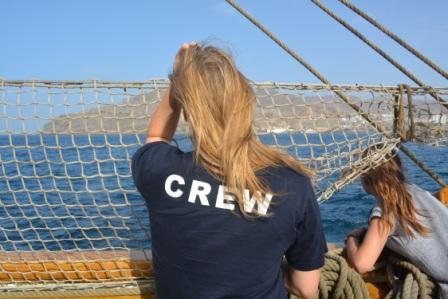 This is a blog about the 8-12 watch, a blog about something similar to despair because of another 9 days on the Atlantic and a blog about a coming storm. It might be spiced up a little with some everyday exaggerations. And I have to warn you, it might contain traces of some Gunilla-triggered wannabe deep thoughts, almost on the brink of philosophy. I can’t guarantee your souls’ safety. Even though I wanted to kick some harmless gossip in somewhere I came to better thoughts. Well, mostly this blog is about the day we had to hold our positions against the wrathful onslaught of two hungry watches. You see we had no “fika”. We really had nothing but some tea, a cheese, a few raisins and our wits to keep them from tearing through our “byssa” like a pack of wolfs. This is the story of that day as “backis”. This is the story of the b-day (b for “backis” and not birthday for those who wonders).

The day started of with a lovely breakfast. We got fresh apple slices to have in our yoghurt, which by the way is very good. I’ve slept enough the latest time, mostly because we lately were in port, and the sea routines haven’t got me weary yet. After the watch-shift, P-J and I went to the kitchen as “backisar”. Working four hours got me tired. Not too much to tell about it, except that we made a wonderful pasta. It’s funny how I were really proud of it, even though the chefs stood for the recipe and most of the difficult work. Still, on a boat like this, it’s just the same being in the kitchen as sailing. I mean, as a single person you can’t do much, but together we take the ship through waves and wind across the Atlantic, or serves pasta to 51 starving people. Two feats that are almost equally heroic.

After some spare time spent studying and sleeping, or both at the same time, once again we went up to the kitchen. P-J put on some heavy metal that we both liked, and to it we prepared a “fika” with a little extra. We were allowed to serve apple slices. It has a truly remarkable effect on the watch. A slightly euphoric feeling spreads through the room, and the first minutes everyone’s focus snaps in a hundred per cent on the days treat. Doesn’t really matter what’s special about the fika. Just mention that this particular “fika” will be a special one and everyone gets a boost of energy. However this time we had to go carefully on the apples. Our supply has to hold all the way to Portsmouth. This meaning we only had about two per person, only counting us on watch. So when it turned out we were almost out of bread to, the problems started stacking up. Soon our arsenal of butter, salami and tomatoes were useless, and all the apples were gone. As I said before, the mood of the day can be greatly improved by a good fika. And it goes the other way around to. So when the post came in, there was no bread left. Midships watch is probably the most gentle and peaceful watch, but at this point the other free people came running for some fika. About here both me and P-J realised we were in serious trouble. To make a long story short, after some turns back and forth and a brilliant counter with a Trojan horse from our side (an apple prepared with sambal oelek), we came through with our lives, although the “byssan” had been seriously looted. Amongst the lost gods were almost all lactose free cookies and half of one of the other watches apples.

When I’m writing this, there aren’t much waves and it were quite still during the day too. A blessing, too many times I’ve been in the “byssan” with heavy rolling. It’s like the scene in harry potter, with the flying-self-dishing-and-cleaning-porcelain. Just that it’s like… played backwards. Well I said that there isn’t too much waves right now, although we heard from our first mate today that there are tougher weathers coming. It’s estimated that we’ll get winds up to about 17 m/s. Although not quite a storm, which is defined as average winds about 23 m/s, it’s still a lot more of both wind and waves. I’m feeling quite double about it. While it’s comfortable with the slow calm going we’re having right now, I get a bang from just the thought of heavy weather barrowing. WW and me are having some kind of friendly competition, pushing each other into barrowing faster and neater. Although we still hasn’t got our chance to do so in full storm. Thus my opinion on the matter is that if Poseidon’s going to give us wind, he might as well give us a full-blown hurricane. But he probably cares zip about my feelings.