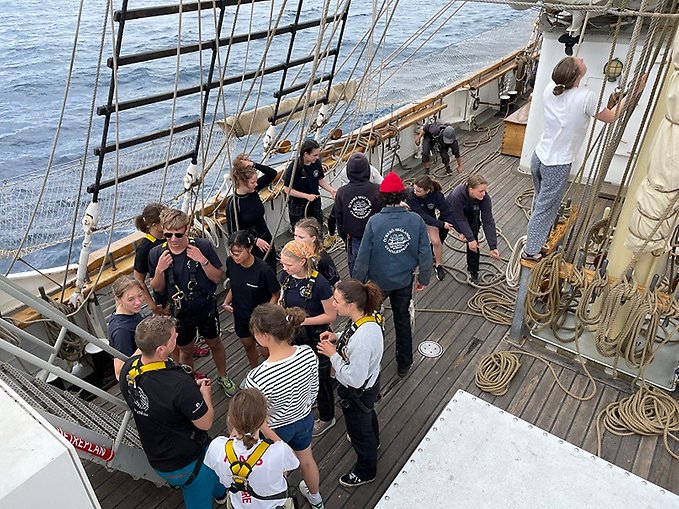 Twelve o'clock when I walk outside this dark night, I become positivly suprised by a warm light breeze. Since my twilight vision has not yet caught up with me, I can not se anything at the maindeck, and after a few steps I stumble at the deck hatch. The deck hatch makes no use, but why should it not.

Every Sunday we have practice, normally we practice safety things, but today we practice stay reversal. It was fun to train at changing tack. If we students succeede to go about alone, without commanders we will cut off Leo our first officer´s hair. Me and Ellen trimmed the mizzen sail, and I set the mildew sail again.

Before you can set the mildew sail you need to overhaul the mildew sheet. The most common is that you climb up in the rig, and coil the sheet and then drop it on the deck at the right side. Leo our first officer came as usualy with an own idea, and he threw it to the right side. I succeeded half at my fifth try.

It Became more complicated when Sigrid were going to slack at the mildew´s downhaul, wich you are doing when you set that types of sail. Since the decks hatch was built are there even less space for working on the stern side of the main mast. And i could spend a bit of my blog to write why i do not like the deck hatch and the new renovation.

Under the deck hatch there are a corridor. During the atum there was a bigger renovation inside Gunilla. The big mess was moved by the stern, and then the cabins which was located there before was moved a bow. The toilets was also re builded, and if I be honest this is one of the few succeeded things with the renovation. I think that the two three-bede-cabins should stay by the stern of the big mess. The big mess will also keep it´s old location. The quality of the old big mess was that it was a bypass, they who lived att the cabins by the stern of the big mess needed to walk thrue the big mess to reach their cabins. It was much persons and noise there. To move the big mess was a big mistake, now the big mess is a confined space and closed room. It feels like a confined space, even if it is not smaller than the old. It feels like the end of the boat, but it was not that before. If the mess vas locatedat its old place, the deck hatch would have been located over the big mess. I think that it could have been a skylight, which takes in natural light, and it feels more open and not that closed.