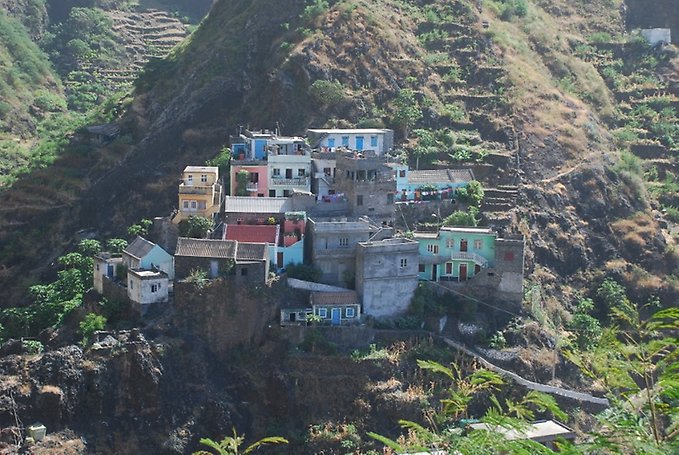 It has been two really exciting days on Santo Antao. We have met interesting people, seeing views like never before and like always, we had fun!

The second day of our two-day trip on the island Santo Antao began outside the local church in Ribera Grande, after we had been laying on top of each other in a small hotel room. After our little meeting with the “leaders” we were set free to make our second hike. We were all headed towards Fontanias and like everyone else in this country we toke an “alugier” (which is a pickup truck with seats on the back) to our new destination. The way to Fontanias was beautiful, on one side of the road there were mountains that were higher up in the sky then the clouds them self, and on the other side, ocean as far as the eye can see.

After one hour and a half we finally arrived in the little village of Fontanias. It was much smaller than we’d expected but very beautiful with a lot of coluorful houses. After a short look in the village we aimed for a view spot higher up in the breath-taking mountains.

After a very steep hike from the village we were finally sat on the rocks, eating our food that we brought with us. It’s not every day you are sit on rocks in the Cape Verdean mountains, eating chips almost 1000 meters above the water surface with that view. That I can tell you for sure. With that said we had a great trip, but with not so long left before our “alugier guy” was to come and take us back to the ferry we headed back to the village.

The travel with the ferry didn’t take that long time, it didn’t feel so either way, perhaps because we all fell asleep as rocks in those over comfortable cinema seats but let that be a mystery.

Well back at Gunilla tired as 16 year old teenagers could ever be we finally ate some real food. After two days of eating cookies and drinking energy drinks it was really nice with something that didn’t just contain sugar.

After we finished dinner everyone aimed for their beds but me and my roommates were heading out to the city. We were going to meet up with some of the boys from the local school that we visited a few days back (the same boys that we had beat in the football game with school). We had a really fun time with the boys with many laughs involved even though we didn’t see them for that long.

Goodbye from us on Gunilla, we hope that you’ll have an amazing New Year with a lot of fireworks!