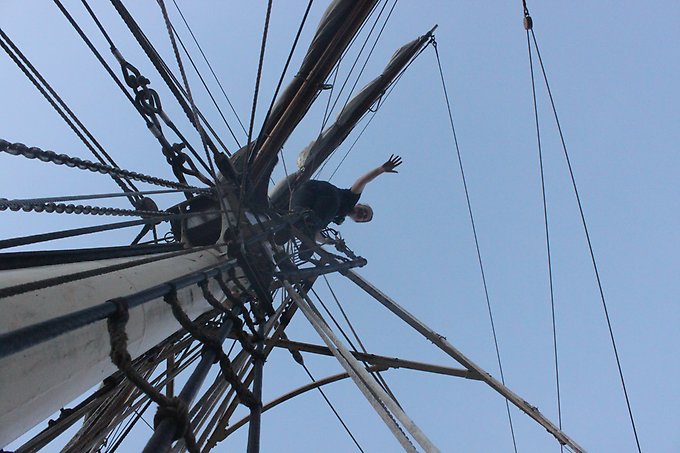 The morning after our first evening in Charleston we woke like normal at seven in the morning. I drank my coffee and ate breakfast before getting ready for watch. At eight o’clock we were all outside for our daily morning meeting, the first one in Charleston.

The other watches were more than ready to leave when the chief officer Jesper gave us some bad news. He had looked through our rooms and they couldn’t leave until they had cleaned some in their rooms. While they fixed inside, our watch started working. The crew decided we were going to grease some wires, and we were going to do the ones you could only reach by climbing into a bosun’s chair and get hoisted down. Samuel and I were going into the chairs and Petter and Nils were going to help us. Before we could grease the wires we prepared the chairs climbed up to tie different ropes to pull us up and secure our harness into. Once everything was done I climbed up to the top of the highest mast. At the top I climbed into the chair and while I greased the wire Petter held the rope letting me down. Me and Samuel were in the chair until lunch when the chefs and students in the kitchen had made pizza for us. After lunch we were going to remove rust from the rigs. At the beginning I helped get bosun’s chair up into the front rig and the me Nils and Lovisa were going to work in the other rig. We spent hours knocking and brushing the rust away until we had to start cleaning. Since we had been working outside for so long we had too clean fast so we were ready before dinner. A lot of the people in the free watches came back for dinner and we all ate another great meal by our chef. After dinner we were finally free for the day, but we still couldn’t leave the boat so I spent the evening with my friend Malin drinking tea and talking. At sunset we went up onto the roof of the bridge to see the last of the sun. It was a great end to a long day, but I had to go to sleep pretty early because I had to be awake from 3.30 to 6.30 to keep watch during the night.