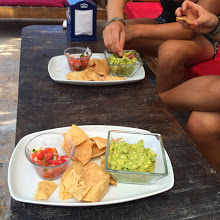 The day started at seven o'clock this morning for midships because we were assigned to take Gunilla to the quay where we are going to berth here in Mexico.

At eight o´clock we started directly by taking up the anchor and then the pilot came onboard to guide us in the right direction to the pier. After approximately 15 minutes we saw Katarina, our principal, standing on the pier waving to us and that meant that we finally had arrived to Mexico! It was fun to see her and it felt special to welcome her onboard. We all gave her a big warm hug and she told us that we had a beautiful tan which was nice to hear, because we still feel like we are as pale as we were when we left Sweden in February.

T/S Gunilla is berthed at a 7 kilometer long pier here in Mexico and we are not allowed to walk on it. Therefore, we have to take a taxi for eight minutes before we can say that we´re in the city called Progreso. In Progreso we walked around, took out some Mexican pesos and ate some coconut-flavored icecream. We found a restaurant called Maya Ka and since we´re in Mexico we ordered guacamole, nachos, quesadillas and lemonade. All I can say about the food is WOW. The guacamole in Sweden taste nothing compared to the guacamole here in Mexico. It was creamy, tasteful, delicious and totally perfect. It may sound silly, but I´m telling the truth and I think that I speak for all my classmates when I say that. After the food-coma we walked on the beach, looked through local stores and then we took a taxi back to Gunilla.

Right now I´m sitting in the room called “Stora mässen” onboard, the big gathering room. It´s actually quite fun because if you translate the word to english the room is called “the big mess” and that word really explains the room. There is always people that screams while they are playing cards, books and computers on the tables, people eating popcorn, flies that are irritating and sometimes people actually tries to study. It sure is a BIG mess. The main subject between the students right now is how beautiful we thought Mexico was today. Earlier we thought (and still think) that Montego Bay in Jamaica was the most colorful and beautiful place we´ve ever seen, then when we came to Belize City we were shocked how beautiful it was there as well. But today when we came to Progreso we were even more shocked. Mexico is a really beautiful country and just after one day here, I can say that I never want to leave this place.