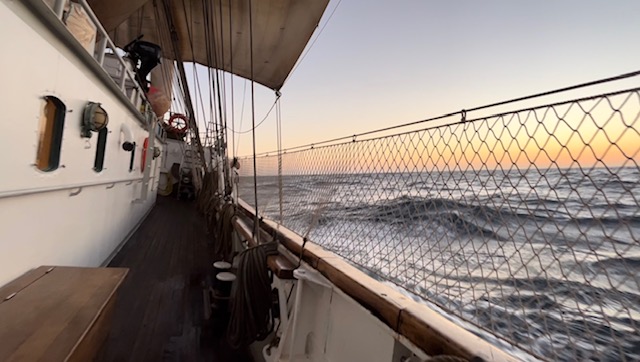 Another sunny day with ocean as far as the eye can see. This day has brought us much knowledge about different knots, ropes and sails. The day started with some delicious breakfast/lunch in ”lilla mässen” followed by a watch shift from babord to midskepps.

During the watchshift we took up what the previous watch had accomplished in the morning, things as setting different sails, learning where different ropes are and what they are used for. When the shift was done the three posts (Rorsgängare, utkik and livbojsvakt) reported what they had done in their shift to the upcoming new three posts. When the other guard had gone inside the boat the guard began to do different practices, for example to set and take down different sails.

The day went on as usual until 3 pm when it was time to have a fifteen minute break and eat some ”fika”. After the fika they went back to working. Finally when the dayshift was over at 4 pm it was time for lessons. They started with geography were they worked on preparing for the arrival in Senegal. After the geography lesson it was time for dinner where we ate Johannes (second chef) Pasta Putanesca which is a type of tomato pasta with tiny pieces of sardines. Almost everyone thought it was very tasty. After the dinner we continued with the lessons where we had Swedish and in that lesson we basically just read in a novel.

After the lessons it was time to go to bed and sleep a few a hours before it was time for the nightshift so we got ”purrade” thirty minutes before 12 pm so we got dressed and went up on the really dark deck to switch with the guard that had 8-12 pm.

The night shift went much easier since it wasn’t so warm and there was no sun shining in your eyes. After approximately 2 hours it was time for night break where we had some apple pie with vanilla sauce. After the break there wasn’t so much more to do so we got a private lesson from the captain where he taught us about different stars and zodiac signs and what they meant.

The night ended with some storytelling on upper deck with our watch leader. After we had welcomed the other guard who was going to take over from us we went directly into bed and slept through the whole night.