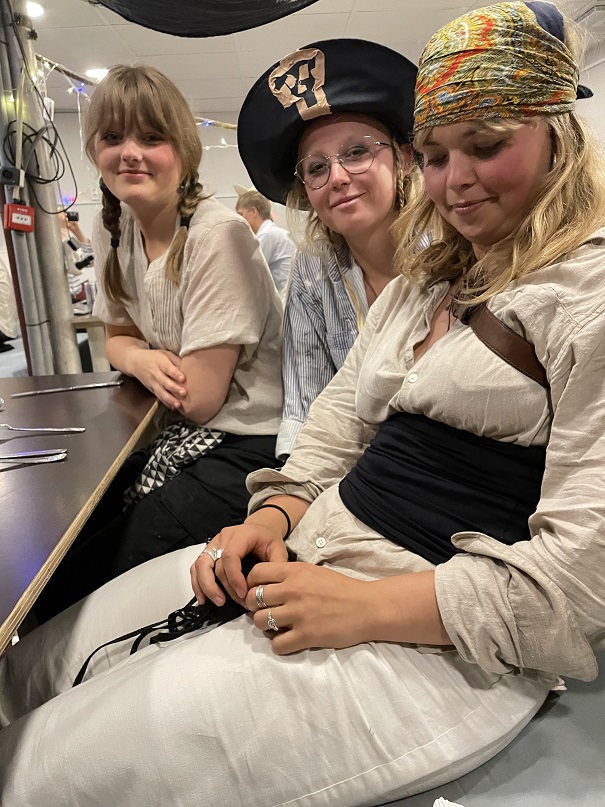 This morning when I got up for breakfast something was different. Instead of the normal lighting in the big mess, the lights were dimmed and a colourful disco light was placed in the middle of the room. Honestly, I wasn’t that surprised by it and barely noticed there was a change until I was halfway through my sandwich. My guess is that it was our classmate Malte who was behind the festive morning. He is one of the many people on this boat who spreads that extra bit of joy with the little things they do – such as a disco light for breakfast. Nevertheless, today was no regular day. It was our pack day and final dinner party.

At the morning assembly I was already in my work clothes along with half of the other crew. On pack days we divide ourselves into four groups. Two stays on the boat to pack and work while the other two must go ashore. By lunchtime we switch. I started my day on deck by cleaning all of our safety harnesses that we use in the rig. After that we cleaned the quarterdeck and placed a thick rope down for all our luggage to be placed there when finished packing. By ten o’clock it was time for fika and those who had been working could go and start packing their belongings as the others had just finished theirs. I managed to finish packing in good time and luckily my bag wasn’t overweight. Many struggled to get their bags to weigh under 23kg. A few people went together and bought a new bag to share and later check in at the airport. On pack days we need to clear everything out of our cabins except a small hand luggage that easily can be moved. It is because tomorrow is our dearly loved cleaning day. If anything is left in the cabin when the cleaning begins it will be thrown out.

By lunchtime the other two groups had returned to the boat and it was our turn to get out of their way. I used this time to run some errands in town. I posted some postcards, bought some cheese and other bits and bobs for family and friends at home. Afterwards we sat down at a café in one of the botanical gardens for a cup of coffee and a piece of delicious chocolate cake. I’ve been to that place twice before and had the same exact order each time! Why change a winning concept?

When we got back to the boat around five thirty it was time to get changed for dinner. The theme for the party was pirates. Everyone looked lovely with eyepatches, makeup and inventive ways to turn their clothes into something pirate-y. The party-committee who planned the dinner had done a really good job in decorating the big mess. It looked a bit like a Caribbean taverna with sheets hanging from the ceiling together with led lights and pieces of rope in different knots. For food, the chefs served a three-course meal. As a starter we got a slice of toast with mozzarella and tomatoes, for the main it was meat, potatoes and a sauce and for dessert a lemon mousse with whipped cream.

The whole evening was beautiful. People had prepared speeches that made us roar with laughter and songs that made us all happy-sad. The committee had also planned some games and a music quiz for us to do during the evening. Every trip, we have had a sort of tradition where we make a video from each watch to show at the dinner party. This year the ships company had made one of their own! It was SO funny. It was by far the best one I’ve seen. It was mostly filled with them “breaking rules” that they keep on reminding us to follow or inside jokes that have been with us during this trip. But the best thing that happened all evening must have been the entrance of our first mate Leo. As you probably know if you’ve followed these blogs a while, Leo made a bet with us that if we could complete a “coming about” (when you turn the boat around going against the wind instead of with it) without any help from the crew he would cut his dreadlocks off. And, of course, we did it! So today was the day and it turned out very well. Apparently, he has had his dreads for about eleven years so it was a big change for him as well.

As the night came to an end, we all helped to clean things up and then get ready for bed. Hopefully we will all get some sleep even though it is bad weather. The wind has picked up and we’ve already had trouble with our ropes. I believe one or two of them have snapped and a metal ring on the dock got torn off… But no need to worry! We changed the ropes out and added some extra ones so it shouldn’t be any problem.

All in all, it has been a very successful day if I say so myself. Not really looking forward to cleaning all day tomorrow but I’m sure that will go just as well. That’s all from me and I wish you all a good night.