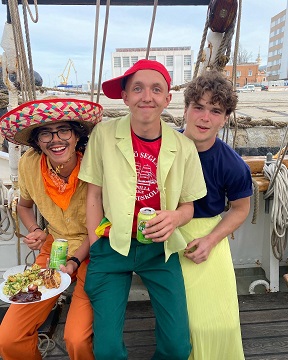 This day started off with some nice city strolling in beautiful Cadiz. The narrow and picturesque streets where still calm and the sun was rising fast. Every facade was crammed with small balconies and ancient windows. We made a quick stop at a local café to grab a toast and drink some coffee.

We then joined some more people from the class at the beach and a bunch of Spanish students aged between 15 and 17. We didn’t really know what to expect but we had been told that we were going to play a sport called Jagger. It turned out to be a strange combination between rugby and sword fighting. It also turned out to be a lot of fun! The Spanish students had made and decorated their own swords and shields in foam rubber and were really tough players. After two hours of lots of laughter and sweat, we said goodbye to our newly made friends and continued towards the city.

We found a great second-hand shop where all of us made some real bargains and left the store with a great feeling. I later split up with my friends to meet up with my dad who had been staying in Portugal for the last weeks and now made a quick trip over the border to visit me and Gunilla. It was great to catch up a bit and eat some long-awaited paella. We took a walk along the water and slowly made our way back to the boat where a party was in full swing! Our beloved teachers Ering and Hanna- Sofia were leaving the ship the following morning so a good-bye party was a must! Our party-committee had made a great effort with the decorations and music, and I came right in time for the dessert. Everyone had dressed up as colourful as they could. We ate good food, played quiz, and sang a praise song to our teachers, a remake of the good old classic “Jolene”, but way better. It was a huge success. At the end of the night, everyone was pretty emotional as we said goodbye to our teachers, even if we were going to see them again in just three weeks. I think many felt as if though that was the beginning of the end, and that the graduation is closing in so fast. I went to bed with a strange feeling that night, didn’t know if I would cry or laugh. I thought about all the people that a I will miss and the memories that we have made over the years. This day very special for me and will stay in my memory for a long time ahead!