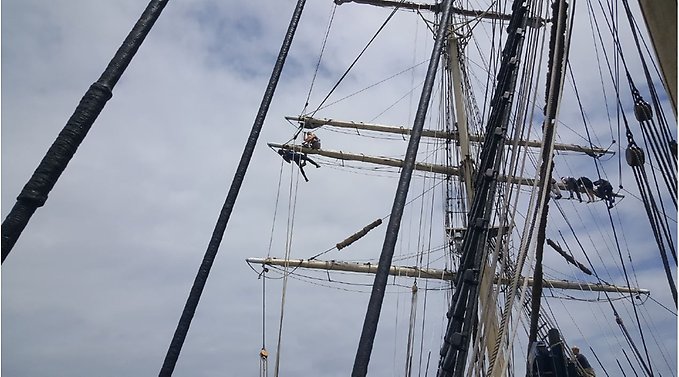 You wake up, try to eat some breakfeast and then be in time for when your watch
begins, just like any day at sea. But this day isn't any ordinary day. Everyone is
watching the horizon like a baby waiting for a treat, hoping to get the first sight of
land since when we left bermuda 12 days ago.

The time is 10.55 and everyone on starbord is lined up, redy to take over the watch
and lead Gunilla to shore in Horta. We couldn't even see any land when we started
our watch but there where a lot of preparations that had to be done before arriving at
the dock. We had as you may be aware of an incident with one of our front sails,
focken. It got ripped almost completely in two pieces which was pretty crazy. But
focken is not the only sail that got beat up during our trip over the Atlantic which isn't
specially suprising as we reached wind of almost 20m/s. So today we brought down
all the sails that had any defects and needed to be repaired. I counted to six sails but I
have been told it may be even more.

When we get close to shore we only use our engine which means that we need to
bring up all the sails and fasten them. So we all worked together to dowse the sails
and afterwards we climbed up in pairs to furl. Usually you furl the sails pretty quickly
and try to make the results look alright, but now we won't use our sails when we are
in the azores. This means that it should look as good as possible since it will be what
outsiders see of Gunilla and the results will also be seen on every picture taken during
our stay here. So we climbed up and used everything we had to pull the sails up and I
got really satisfied with the outcome, I can even say I was a bit proud of our work.
Now I got sent up the mast again to unlock some ropes and attach them together, this
turned out to be a lot harder than expected. I climbed out to the very end and once out
there I had to lay down on the pert ( a rope that you are supposed to stand on) and
reattach the ropes while swinging in the air on my back against the pert. It cought
some attention and I heard some people taking pictures from the deck which made it
even more fun. The time went by and in the end you get pretty mad when you try to
release the rope but it is stuck in a schackle because of all the rust. Well I guess you
can figure out by yourself that creating a lot of power is pretty difficult when you are
hanging 15-20m over the ground. It ended with me accidently punshing myself in the
face several times when I lost the grip and missing the fika, which just had to be ice
cream. I guess that is something you have to take when you work under these
circumstances.

Now we suddenly could see an amazing Island with hills and farms that made it look
as it was from a movie, I can't explain how nice it felt to finally see land again. More
and more people that wasn't on watch turned up and as if the mood wasn't good
Lukas Larsson Nab1518 enough a bunch of whales turned up to swim right by the ship. They were about 5meters long so they were not specially big for being whales but it was still really
nice to see them upclose. We reached the dock and ended our watch by following the procedure we have used in any harbor this far, for example we attached the ship to the shore and sat up our little bridge that connected the upper deck with land so we could leave the ship. When we finaly got released from our watch I took an almost too long shower and
went in to town for a while. We all were happy by just standing on firm ground again,
but life got even better when we found a supermarket with good wifi, it doesn't take
much more to keep us satisfied these days.