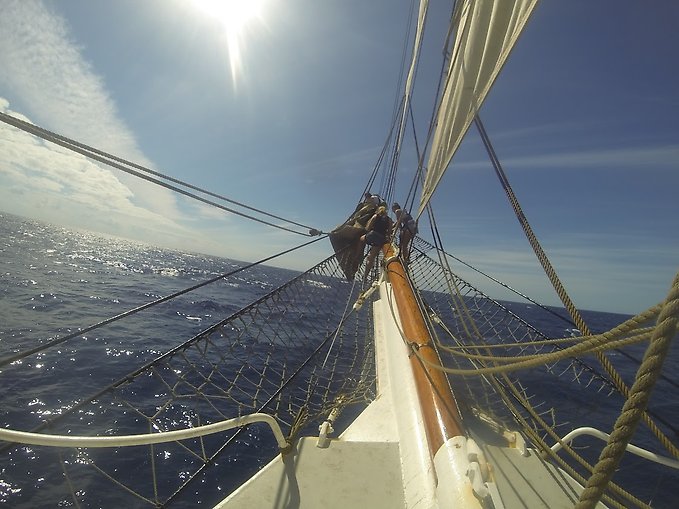 Today was an odd day. Since we left Miami yesterday it was the second day at sea.

The wind was quite heavy and after raising all the sails yesterday we spent the whole Sunday sailing. But during the night the wind switched and the starboard watch had to take down a majority of the sails. The ones that were left are the ones that we are sailing with right now. Unfortunately the wind isn't strong enough so we are getting most of our knots from the engine.

Soon we will pass the north side of Cuba and start the journey along the south side. While sailing on that side we have been promised better winds which will mean that we will be able to rise those sails that we had to take down a couple of hours ago. I am really looking forward to this since sailing with a full rig is something that I adore to do. It makes up for all those times when Gunilla tests my patience.

Today was also the first day with lessons and our director of studies Anne-Li held lessons in both geography and history. Jamaica will be our first harbour were we do interviews and for us to be able to do that we have several preparations to do, therefore the lessons. Barely no one was excited for the lessons, we all would rather lay in our beds and watch movies or something. The fact that the boat has been rolling from side to side all day wasn't making the motivation rise. Quite the opposite happened and several students spend a lot of time on deck, breathing fresh air. Despite the pressing heat, bad air and a rolling boat we managed to make the most out of it. We started the preparations that needed to be done and we are now one step closer to Jamaica.

The only thing left to do is to crawl down in my bed, sleep and hope that I won't melt in the heat. That is the only thing that I am wishing for, that and better winds on the south side of Cuba.