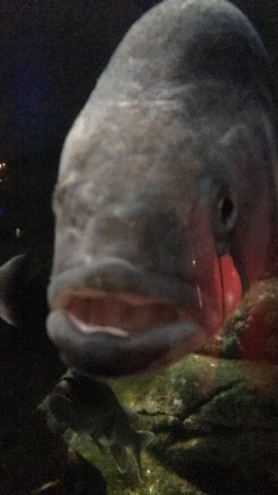 Unluckily they didn’t have otters in Cherbourg which disappointed me a little bit, but instead they had a big submarine. We went into the submarine and one third of it looked like the engine room at Gunilla. It had pipes in different sizes everywhere, gauges of all varieties and a lot of levers. In one part of the ship there were funnels with a pipe, looking like trumpet. In those trumpet things they talked to each other in, like a radio or a phone. The last third consisted of cabins where they slept twelve persons in each, which is four times more than us at T/S Gunilla. The submarine impressed me but not as much as the aquarium.

After this day I have realized that fish are ugly animals. One of the fishes had a nose similar to Pinocchio’s, that fish was my favorite. The only ray-fish in the tank looked like a pig in the face and his tail was two meters long. I think the ray-fish was the most popular because the other fish followed it wherever he was swimming. The dragonfish had their own tank because it’s so poisonous that if you touch it you’ll die of intoxication. The nonsense with the dragonfish is that it look like a stone so it blends in so well. There were also fishes in beautiful colors like pink, yellow and purple but the color doesn't matter, they are still ugly because they are fish.