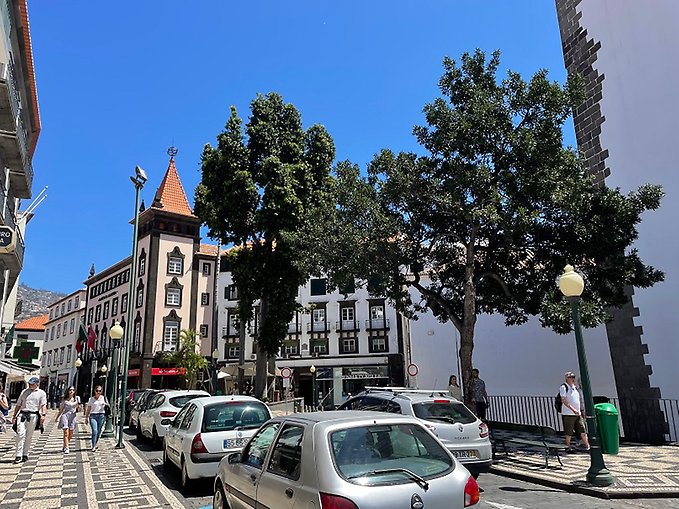 Good Friday - Half a watch and half a day in Funchal!

Due to a cruise ship taking our berth, we got fewer days in port on Madeira than anticipated. However, this worked out better than expected! Instead of the usual full-day guard, my watch was divided into two. This meant that we got a half-day guard, and a half-day to enjoy Madeira a little more.

I chose to be on guard during the morning because we had a booked table at a restaurant with live Fado music later in the evening, that I had been looking forward to. Until 3 pm, we, a group of 3 people, did maintenance work. Sanding, spot painting, and painting on deck. Accompanied by summer music and the radiant sun we had nothing to complain about. I even had time to read a few pages in my book while we waited for the paint to dry.

When the clock struck 3 pm we got off the boat and walked towards the city, ready for a dip in the sea. On the way, we met some friends who hadn’t been on watch, and together we saw in the distance - what we thought - was a small hidden beach. It turned out, however, that a lot of our Gunilla friends had been equally as observant because there we found a large group of people and some of the officers.

After tumbling around in the waves, we strolled around above the old town in the residential areas. It's incredibly beautiful in Funchal, with its hilly cobbled streets and colorful houses, somewhat reminiscent of Lisbon. A calmer, mini version, of Lisbon.

The table for Fado was booked for 19 o'clock and oh what an awesome experience! In a small room, four long tables were crowded together, and no one sat more than a few meters away from the two guitarists. The musicians were fantastic! It started instrumentally with the classic fado twelve-steel guitar and an acoustic guitar. Then the waiter, who was corking wine for the table next to us, started singing with an incredible voice. The surprises did not stop coming though, because then the only other waiter and a child tuned in. Finally, when it started to be time for us to leave and we thought that there wasn’t anyone else that would sing, the chef - who was the owner of the family restaurant - came out and sang and gave the entire room shivers. It was a powerful experience to hear their voices up close. I think the concept of the waiters pausing their serving to sing was amazing.

A Good Friday, both the English name for the Friday of Christian Easter and the adjective describing the day!