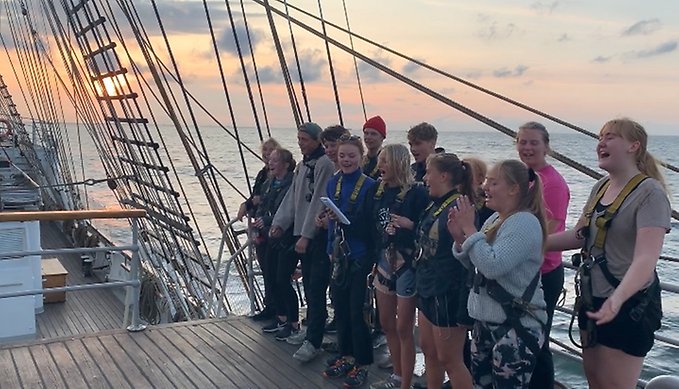 The most days out at the sea look kind of the same. You work, eat, have school lessons, work some more and then go to sleep. Today were actually a little bit more exiting then your average day because it was after a week of preparations (okay, lets be real. No one prepared directly after we got the mission, two days is more like it) finally time for the big song contest here on Gunilla.

Let me give you a little background information. You all probably already know about the watch-system and usually when we switch the working watch we have some kind of competition between the watches. What the competition is going to be is presented the watch-switch before the one that you are actually going to go through with the competition so that you get time to practice. Because of the fact that we had been in Lübeck for a week we had a long time between the presentation of the next competition and the actual performance.

This time the competition was that each watch (Port watch and Starboard watch) would write a song about their watch leader and then perform today when we once again switched the working watch. 8.00 pm we all stood ready to preform and even the midship watch and the chefs were there to watch the competition. The starboard watch, which is my watch was first up and we sang our song. When it was the port watch turn I think I can talk for almost everyone when I say that it was AMAZING. Earlier in the morning they hadn’t even started planning their performance and when it was showtime they didn’t only sing but they danced and it was just great to be honest. My watch understood that this wasn’t going to be an easy win and it took some time for our absolute judge Jesper to decide which watch who would win. He motivated the result with the simple reason that the winning watch had used one of Håkan Hellströms songs as melody and apparently he loves Håkan Hellström. So which watch won? My watch, aka the starboard watch. But honestly I don’t think than anyone really cared about the result, the whole competition was just a fun thing and the vibe was great. It was the perfect way to start our watch and we all were in a good mood.

The whole day I have been a post which I usually don’t prefer to be as you have to stay quiet for the four hours we work and you also miss out on fun or cozy things. One of the cozy things I’m talking about is when sometimes our captain Hans and maintenance work-leader Karin play music with banjo and violin. In two of the three different positions you have as a post you can still be close enough to where they usually play music to hear it. But it’s the saddest feeling to switch position to the last one where you can’t hear the music anymore, knowing what your missing. Tonight I was lucky with the positions and got to hear Hans and Karin play, not once but twice. One time for the whole watch and one time while the watch was cleaning inside and I and one of the other posts Cajsa got played for a bit only us two. I don’t think that you can imagine the coziness of Hans and Karin playing their instruments unless you have experienced it yourself. Also I guess there is other pros with being a post then that 1% chance that you get a private concert. As a post you get time to actually think and be for yourself for a while. Here on Gunilla you are surrounded by people pretty much 24 hours a day and that becomes exhausting for a lot of people and then it is nice to just get a break from socializing for just a few hours.

Anyways, after our watch was over we went straight to bed just as usual.