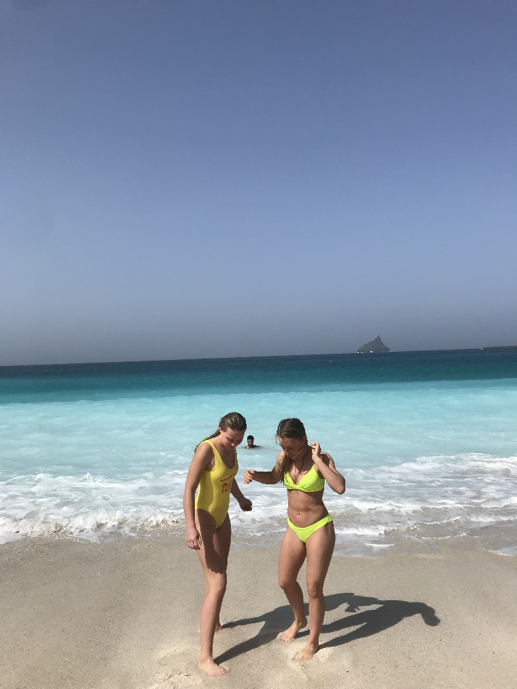 The Last day of 2017 was spent at the Laghina beach with a lot of sun and swimming, something totally different from the New Year's Eve at home.

After a lot of tanning we went back to the boat for some New Year's Eve dinner. We ate entrecồte with some gratinated potatoes. It was the best meal of the whole trip so far. We got dessert too and that’s not something usual around here.

I can see why people are intrested in our life on the boat because it’s surely not like anything else. Instead of celebrating New Year's Eve with family or friends it was celebrated with our teacher and the rest of the Gunilla Crew. People that we didn’t even knew before coming here three weeks ago.

Even so it was a succesful night and the crew had organized a Disco for us. It felt like being slunged back to the second grade again!

After a few hours with dancing it was time to call in the new year! It was an odd experience because all of the boats in the port started to honk at 12 o’clock. It became a strange kind of competition. After too many minutes with honking and ears burning we kind of won. At least we were the last boat honking but we were probably also the most damaged by it.

With ears still beeping we finally left the faboulus Club Gunilla and went to sleep.