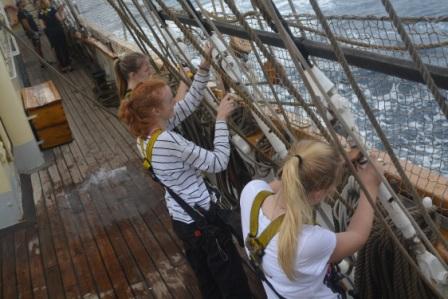 As every other day at the Atlantic the day started with people crawling out of their bed, humbling around in the room, because nobody’s really used to the life on a moving boat yet.

At least my watch, portside who has got the 8-12 watch, got up to breakfast and started to get ready for a long day with hard work. We weren’t prepared for what was ahead of us for the first two hours of the watch.

This morning we had to be there 10 minutes before the watch started, instead of five. This is a punishment everyone in the watch gets if someone forgot their knife or came late the watch before. According to me it’s a little bit unfair that everybody gets punished even if only one person forgot the time or something else. I also get their explanation, they say that it builds a team feeling, which I have a lot of experience about.

Well, I guess you’re tired of me talking about how hard our life here on the boat is, but the worst is yet to come. On our watch, we had to put up and take down and big sail three times. Maybe you don’t think it sounds so hard, but we almost didn’t get any break and we didn’t even do it for a reason. Okay, it might have been for a reason, but I don’t think practicing is a good enough reason for putting me through this! (I hope you get that I’m not quite serious about everything I say), but my hands are still hurting; I don’t think I’ve ever done something that hard in my entire life.

The most annoying thing we must do on the boat is to “kvajla” (excuse my spelling, but I can’t find something that proves this words existence). “Kvajla” is the worst thing you can do if you have bad patience like me. For you who haven’t sailed, “kvajla” is when you kind of twist a rope in a circle and hang it on a “nagel” (not a human nail, a boat “nagel”) so that the rope doesn’t lay on the deck. We have to “Kvajla” almost all the time, even if it is a small job most of us are already annoyed by how hard it is.

The best part of the watch was when we did “kvailing-stafett”, to make hard things fun you can just make it a competition. My competing-spirit came out and I tried hard to “kvajla” faster than everybody, I actually succeeded and continued to do it over and over again until I was so tired that my arms were dying out of pain. Now I know how to “kvajla” fast, which makes the whole thing less boring because it doesn’t take that long time anymore.

Finally, I’m done telling you about everything boring that has happened on the boat today. Almost everybody seemed to be really happy when we understood that it was going to be French toast on “Nattfikat” last night. How can something easy taste that good? Life here on Gunilla makes all of us appreciate all we take for granted back at home.

So, back to the real subject on this blog, what we’ve done today. Expect working our asses off without any actual reason we’ve had lessons, which most of us actually were able to go to, because almost everyone is starting to feel better and leaving the seasickness faze. Then we ate dinner, which was meat, potatoes and a sauce. After that it was time for a nap before our next watch, because for most of us it isn’t enough to sleep 7 hours at night.

As an end to this blog I would like to tell you that the life here on Gunilla isn’t as bad as it might look like throughout reading this blog. If you’re a parent to a student here on the boat you also need to take in mind that you don’t force your child to clean when he or she comes home, because we’ve done enough of cleaning here. Greetings from a ship on the Atlantic called Gunilla!