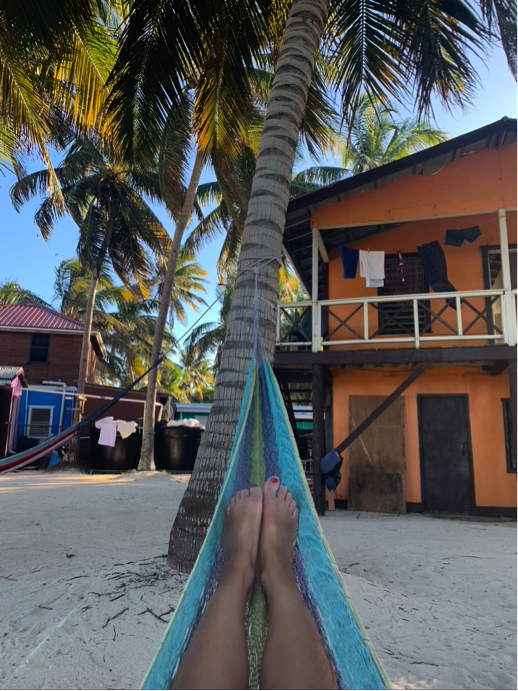 I woke up at 7 am this morning and when I went out on the deck there was a beautiful view over Tobacco caye.

Just ocean, beautiful clear ocean and then a spot with palm trees and some tiny houses in strong colors that was tobacco caye. It was almost too much for the eyes to handle, everything looked like an edit commercial film of something that looked beautiful on screen but in reality it was fake. The thing with tobacco caye is that the reality even looks better than the pictures. It really is a paradise island.

After the breakfast, our watch portside had work to do until 12 pm. We dropped the anchor and we spotted a dolphin family, that was really nice. I haven’t seen that much dolphins yet so it was really nice to see some. Everybody was so excited to leave the boat and explore the island. So, the four-hour watch went really slowly. Our watch was booked for a snorkeling session this day so when we arrived with the boat to the island we started trying out snorkeling gear and then we were on the way with the boat again. The snorkeling was so cool we saw many different fishes, parrot fish, eagle rays, barracudas, sting rays and cowfishes and many more. And the coral reef was amazing. It was a bit scary at first but after a while I got more comfortable.

After the snorkeling, we had some free time on the island, we played beach volleyball and just relaxed on heaven on earth. A wonderful day