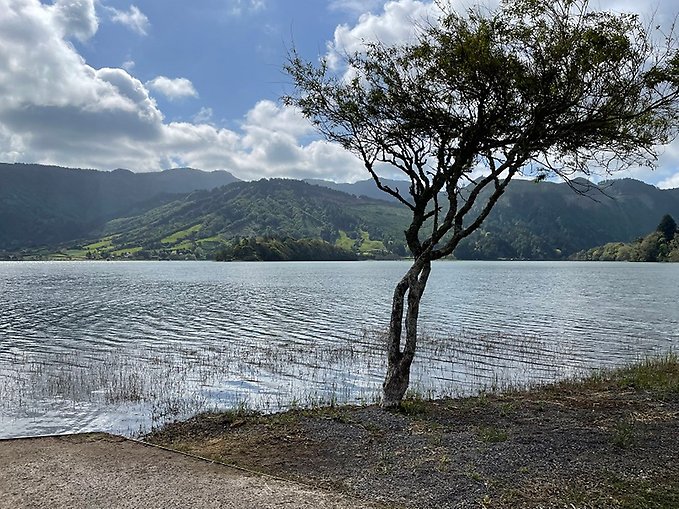 I have realized that blogging is not really my thing but I will try my best because today I have had an eventful near death day to say the least.

I started the day at 4 in the morning when I went on watch. I have to admit that I was in a bit of a sad mood because it was our last night shift ever, but it was compensated with a double break. I came up with the brilliant idea of ​​making a semmel scone with almond paste and whipped cream and I have to say it was a success.

I left the boat as soon as we arrived and had a yogurt bowl and went to the farmers market before we ordered a taxi to the village of Sete Cidades where the famous different colored twin lakes are located. One is blue and the other one is green. According to the legend, they were formed in an unhappy love story where a blue-eyed princess and a green-eyed shepherd were not allowed to live together. They then cried so much that their tears formed these lakes. The color differences are actually due to the reflection of the forest and the sky, but it was foggy and they looked like any other lake.

The taxi ride there was instead more interesting. In addition to our driver driving like Baby in the movie Baby driver, he also had a small spider web tattoo placed on his neck that felt very misplaced. After a quick Flashback googling, we came to the conclusion that the tattoo was usually made as a mark on rapists in prison.

The village by the lake was at least super nice and there were sheep, horses, cows and exciting birds to watch. It was raining though, but we solved it by buying black garbage bags that we made holes in.

We decided to hike around the smaller lake and the trail was dangerous to say the least. The path was so small and had probably not been in use for many years.

The hike took longer than expected and when we arrived at the village again, we realized that it was a good time to try to get a taxi but also to get cash to pay for the taxi.

After many trials and tribulations, we managed to get help from a restaurant that called for a taxi. The man who arrived appeared to be slightly drunk, talked only to himself, did not wear a seatbelt and stomped the gas pedal to the metal in those small curves up in the mountains. Karin and Villemo who were sitting in the front seat panicked while me and Arvid just tried to think of something else in the back seat, but I have to admit that I was scared.