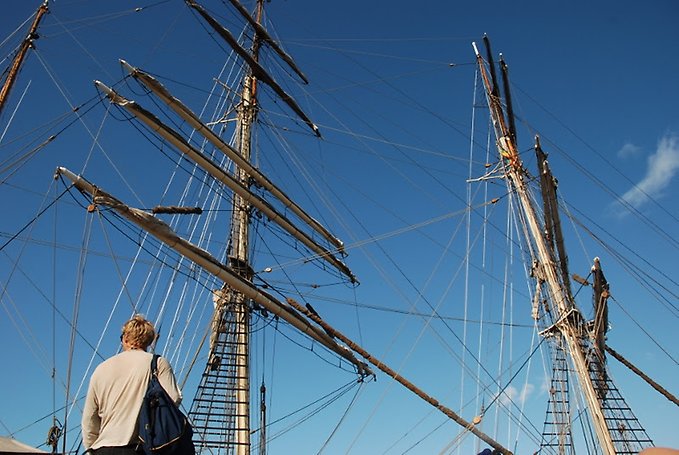 I find it funny that before the voyage we only wanted time to go by fast so that we could go on the trip, and while on the trip we’re counting down the days to when we’re finally home. Yet another example on that we humans can never be happy with what we’ve got.

Today was a good day because we didn’t have duty all day. A day without duty is always a good day. The first thing we did was to go to the store to eat all the things we’ve missed while crossing the Atlantic Ocean. Afterwards we went to a fruit market where there were lots of spices and well, fruit. The fruit wasn’t enough though to feed our hungry sailor stomachs so we went to KFC and bought some fried chicken.

The restaurant KFC is really common here in Grenada, they have it everywhere you go. So if you ever want to take a Grenadian out to dinner you go to KFC. At the restaurant I found a newspaper and what cached my eye was a comic strip on the bottom of the newspaper. It had three pictures; the first one was a picture of a man standing in a city thinking about a tropical island, the next picture had the same man on an island instead thinking about the city, and the third picture was the man standing on an island in the city. I think the comic strip wanted to say that we always want to be somewhere else and when we’re there we want to come home again. I can really relate to that comic strip.

Because we still had our free time and we weren’t tired yet my two friends and I took a minibus to the beach. It was really an experience sitting in a small bus that played high rap-music with 16 other strangers. This would never be acceptable in Sweden, we need our personal space.

While at the beach we found our other friends and had a great time swimming in the warm Caribbean water. Afterwards we decided to go and eat at a recommended restaurant that served home-cooked food. Though they only had hamburgers and that we had to wait an hour it still was really good.

On the way to the boat we found internet connection next to a football field. There we stayed for a long time. I really needed to talk to my loved ones, well those who were awake at 12 pm. Luckily I found someone with enough energy to talk to me. It was really nice escaping reality for a while and instead hearing about how bad the weather is in Sweden. It really made me feel better and made me miss home less. Though, soon it’s only 3 weeks left until were home! Yay…