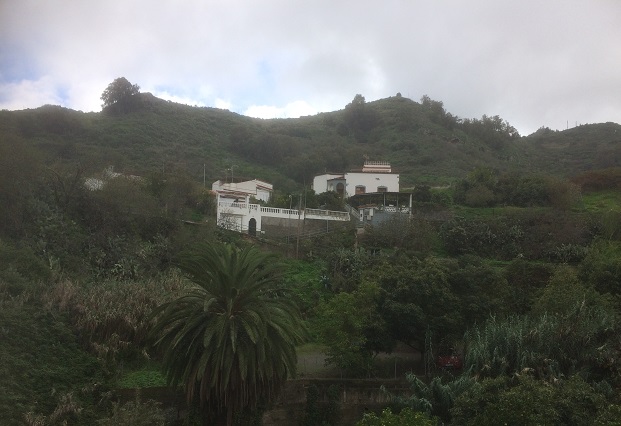 In the mountains of Gran Canaria!

The 1st of December we set sail from Málaga and today we finally arrived in Gran Canarias harbour. During the sailing we saw dolphins, whales, a small tornado and we had powerful winds and waves.

After 9 days onboard the T/S Gunilla it was time to go ashore. Today we also put T/S Gunilla on wharf in Gran Canaria. The port workers are going to paint the bottom of our sailing ship.

After breakfast at about half past nine we left T/S Gunilla to go on a trip in the mountains to see how the locals live. The village was called Teror. But before we took the bus up the mountain, we stopped at a coffee shop in the city of Las Palmas. I had a croissant and a smoothie.

The scenery on the way up the mountain was beautiful. There were green valleys with plantations on the sides and also dryer areas with few trees. You could see all the way to the harbour and over the many small villages.

When we reached the village of Teror we went to the catholic church called “Basilica de la Virgen del Pino”. Afterwards some of us had lunch in local restaurants and others walked around and did some sightseeing and shopping. We even saw how they get water from the mountains as their water source. It was really cool and tasted like sparkling water.

In Teror they had a really cosy ice cream café called “El Canario”. They sold handmade ice cream made out of goat’s milk, which was weird.

It was a nice visit in Teror and at half past two we took the bus back to Las Palmas again. In Las Palmas me and my friends wanted to explore the city more so we went up and down the streets and visited the old part of town. On the way home we walked along the beach in the sunset. When we were in the harbour the port workers had taken T/S Gunilla in a dry dock on land.

Today it´s been a nice and an interesting day in the mountains.