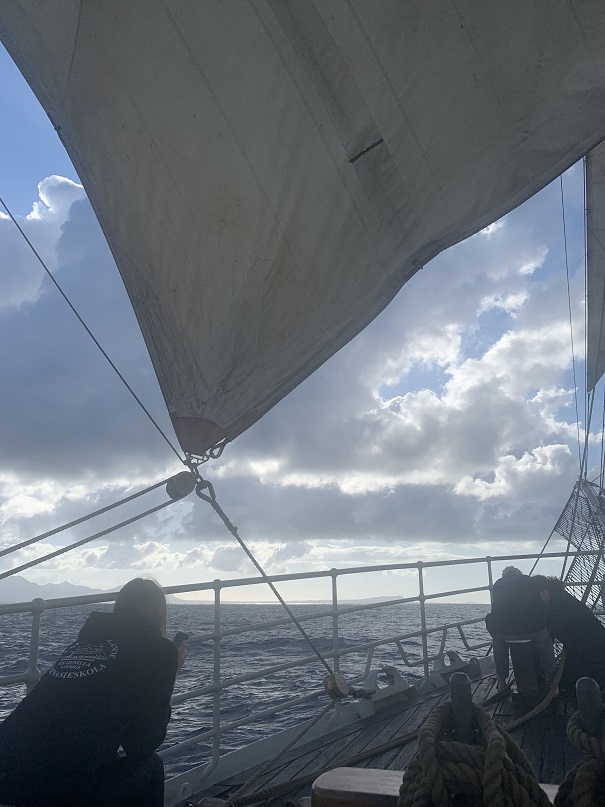 Now the first leg on our trip is done and I think that everybody is exited for a few days on land. Especially after a quite hard first leg, with hard and bad weather. The crew haven’t experienced this bad weather on this leg between Malaga and Las Palmas.

My watch was the first watch that saw land, it was during our 04-08 watch. Everybody thought it was a big ship, but when it got lighter and lighter, we could see the volcano islands, the Canary Islands. The mode in the watch turned upside down, everyone became happy and excited. The first leg have been difficult, many have been laying on deck seasick, including myself. It will be nice after one week at sea have solid ground under my feet’s, when you take a shower, when you cook and especially not having to hit your head on the wall every night.

Under our 04-08 watch it didn’t happen so much, we trained on some hitches with our watch leader in the light from the navigation light on the poop, and as usual we cleaned the deck. When we were done with that we sat and talked and came up with a song to sing to the next watch, starboard. We changed the lyrics on ABBA’s Ring Ring. Usually I sleep after the watch but since we were so close to land I stayed up to see if I would have any connection so, I could call my family for the first time in one week.

We thought that we were going to anchor out in the sound between Lanzarote and Fuerteventura. But we didn’t get permission to do that so we continued on to Las Palmas. On the sail from Lanzarote towards Las Palmas the weather calmed down but it was nice because my hands are swollen and swore from all the pulling on tamps. Just because the weather has calmed down doesn’t mean that its easier on board.

When we will arrive in Las Palmas Gunilla will be up on dry land because of the work that will be done on the boat. When this will happen, we pupils aren’t allowed to be on board the boat so we will get lots of free time in this port. So we will be able to do much more sightseeing in this port.

We will arrive tomorrow at nine in Las Palmas