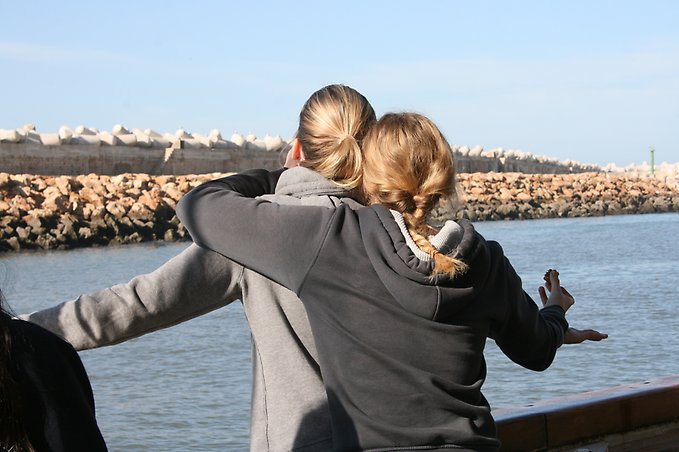 It’s Monday today which means that we are heading off to Mindelo, Cape Vert.

Today we woke up as usual at seven o’clock to eat breakfeast 7:15. People were really tired from being up late last night when we celebrated Christmas.

We had aimed to leave a quarter past ten, but the Spanish man who was supposed to help us never seemed to arrive. But he eventually did and off we went!

The 26th of December was a windy day. I reccon the wind speed was somewhere between 15 and 20 m/s (one of the commanders said it was a so called ”kuling”). And yes, the waves were quite high. I was the lookout at that moment and the waves washed over me, like sitting in the frontseat in Flum ride at Liseberg. It was really scary but also very fun. The captain called me to say that I can be a lookout somewhere more safe. Since we were just a couple of hundreds of meters away from land, it didn’t feel as dangerous as it may sound.

Thanks to pills, bracelets, band-aids or just us being amazing, we weren’t as sea sick this day. Of course some of us were, but not by far as many as on the previous distance. Today was the first day at sea when actually everyone in our guard ate together.

We’re facing a week-long trip to our next harbour but the fact that we’re on our way to Mindelo motivates us.

With love from onboard!