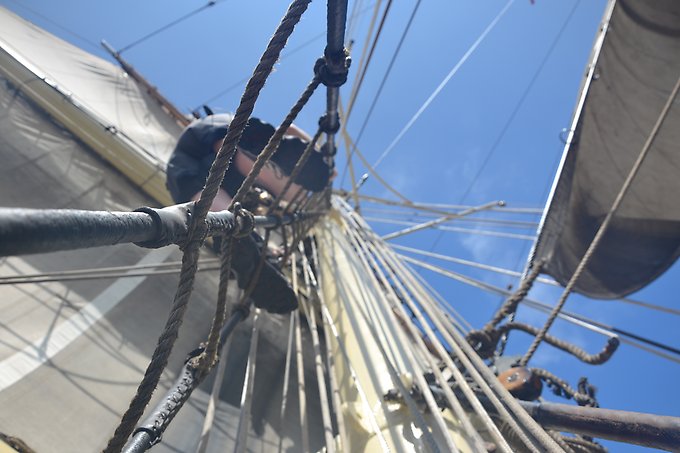 Lessons you learn while cleaning a fan-room and more

As usual the day began at 7 am with breakfast, which to everyones surprise today contained a new kind of muesli!

Lessons you learn while cleaning a fan-room and more

As usual the day began at 7 am with breakfast, which to everyones surprise today contained a new kind of muesli! I must say that it certainly was a pleasant surprise because I think all of us students, including myself, have tired of the old one by now. Anyhow the ”morning meeting” went by smoothly and a few of the crew members said their goodbyes before leaving the ship.

My watch, Portside, had watch today and therefore we had to stay onboard and do maintenance. I had no problem with that and was definitely not jealous of the other two watches, who were free to do what they wanted. The reason why I was fine with staying on Gunilla was that it was pouring outside. Other than today we have been lucky with the weather and for the most part had the sun shine on us.

The first order we got was to clean the ”fan-room”. We began by simply taking everything that could be moved out of the room and then vacuuming the floor and cleaning the walls and shelves. Let me just say that that room can store a LOT! The entire ”Big Mäss” and the ”Large Square” became stuffed with all kinds off things. It felt a bit like cleaning ones garage… Let me explain;

Sorting screws, buttons and fluorescent lamps is actually kind of relaxing. Four hours after starting the cleaning-project the fan-room looked flawless and I continued with the next assignment: changing the already existing and making new ”sytåg” (specially tied ropes that keeps blocks, pulleys and such in place). Sleepy regards from a cloudy, but relatively warm Horta!Now it is finally time to crawl into my cozy bunk and sleep a few hours.The time flew by and suddenly the clock had struck five and it was time to begin with the cleaning of the student- and crew-quarters. That did not go as smoothly and we were forced to redo a few things here and there… Well well sometimes mistakes are maid ;)