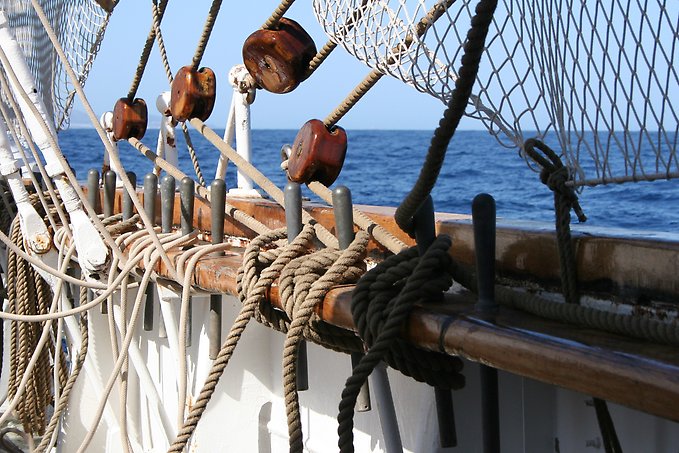 Life at the sea

This day started out as any other day at the 4-8 guard at sea. I woke up a bit before 4 am in the morning, got dressed and then we were out at deck by 10 minutes to 4. My role during this session was to be rotating between posts, that meant that I would rotate between being lookout, lifeguard and steering the boat.

I started as lookout, and it was pitch dark outside so there really wasn’t anything except the night sky to look out for. Later I rotated to steering the boat and the course I was holding was 250, it was really easy to hold course because the wind and waves we re supposed to come in by midday later. After 30 minutes of steering the clock hit 5 am which meant that the rest of the workforce went for “fika”.

All the posts must wait for 15 minutes to exchange their post with one person in the workforce because there can’t be any empty post at any time so a quarter past 5 am I took my break. When I came back, I switched positions with the person posing as lifeguard. As lifeguard you’re only job is to keep an eye to where everybody is which is most important at night. The overall experience of just rotating between posts all day can be pretty dull but that can be sort of calming in a way. Overall, it was a very relaxing session.

After I’d gotten my sleep, I woke up to eat lunch/breakfast. After this we instantly went to have classes for 4 hours before we begin our next session. In the classes we have right now we mostly go over the minor travel essays. After all these lessons our session began again but today, I was in the workforce. The difference between the waves during this session and the one before were really big. This was the first times all the security stuff we’ve learnt really started mattering because now you understood how accidents could happen with these conditions.

The two things I got done before dinner was to haul a sail at the front of the ship and I scrubbed the deck a bit. After dinner we climbed up the rigg just for some climbing training under these conditions. There really wasn’t much other work to be done this session so it ended with a lesson about star signs, with these new winds our speed has also more than doubled compared to the day before and at this pace the warnings that we might come to Dakhar late have switched to arriving earlier than expected.