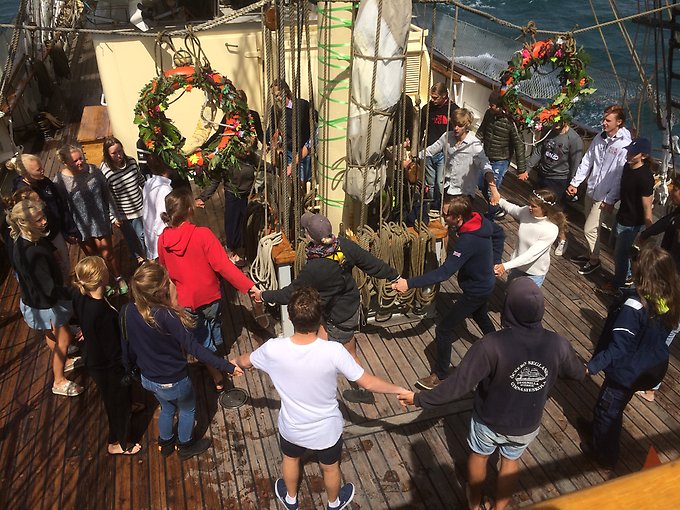 Lifebuoys in the mast and små grodorna on deck

Midsummer is a day usually spent at home with family members, strawberries, ice cream, fantastic cuisine and that drink which makes people a bit peculiar. We tried to carry our traditions with us as best we could, but being on a ship in the English canal makes you alter those traditions just a bit.

As usual, the day began, and it began as usual. The four hours that followed after waking up were a well-established routine which can be quickly summarized in a row of very short sentences.

At noon, the watch ended and as a pleasant surprise all watches were free to have a joint midsummer lunch. We carried our Swedish traditions to the English canal to celebrate that the brightest day of the year had come. On the tables were the classic favourites herring, smoked salmon and meatballs. But the feeling of a typical Swedish midsummer did not end there, for by every plate stood a small glass of snaps. As a minor, my official statement will henceforth be that this was my first introduction to this thing called snaps. Although the snaps was non-alcoholic, it had been edged with a ton of ginger, making it burn your throat on its way down, just like a regular snaps “apparently” does.

Just like a regular midsummer, the lunch was rather stressed, and after forty-five minutes the party was moved to deck, were there were lifebuoys clad in flowers hanging on either side of the main mast, making it look like a typical midsommarstång. There were games to be played and challenges to be won, all done with big smiles on everyone’s faces.

We danced around our decorated mast singing små grodorna and other songs fitting this occasion. We finally finished off the dancing with a session of raketen, before we went down below deck with the best mood possible, almost levitating on the cheerful atmosphere.

As usual, the rest of the day came, and it went as usual.