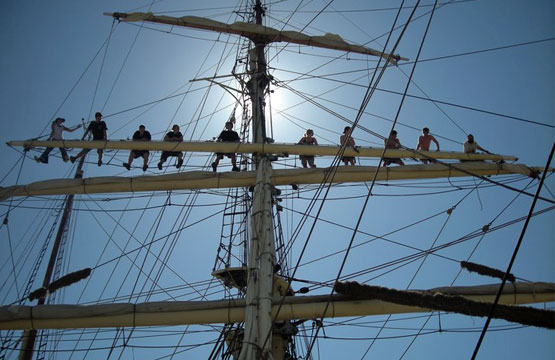 Today port sides watch went up at 3:30am for the 04:00-08:00 watch. Under the watch we climbed in the rig and tied up three sails in the dark, meanwhile the posts kept the ship on the right course and under watch.

At 5am it was fika time, the fika consisted of the normal stuff like bread and butter, ham and cheese.

After the fika the darkness of the night started to fade away when the sun took its place in the sky, a beautiful sun rise by the sea. In the light we only had about 60 minutes to scrub the deck which were plenty of time. The last minutes of the watch we played a game called “KUL” because it was our last night watch with Henny how is our supervisor. Then we went to sleep for an hour or two.

For lunch we got fried rise with some meat mixed in the mess, this tasted strange but not bad. After lunch we usually have lessons but it was Saturday so there were none. I used this time to sleep even more and I don’t know what the rest of the watch did under this time. The one thing I know is that it was chocolate cake to the 15 fika because it was the chocolate cake day in Sweden.

At 4pm port sides watch went on watch again and under the time it was light outside we had to scrub the deck once more but all over the ship. In the middle of our watch it were dinner that were meatballs and mashed potato. After the dinner it was dark outside so we cleaned the interior of the ship. When we were done the clock were late and I went to sleep early.