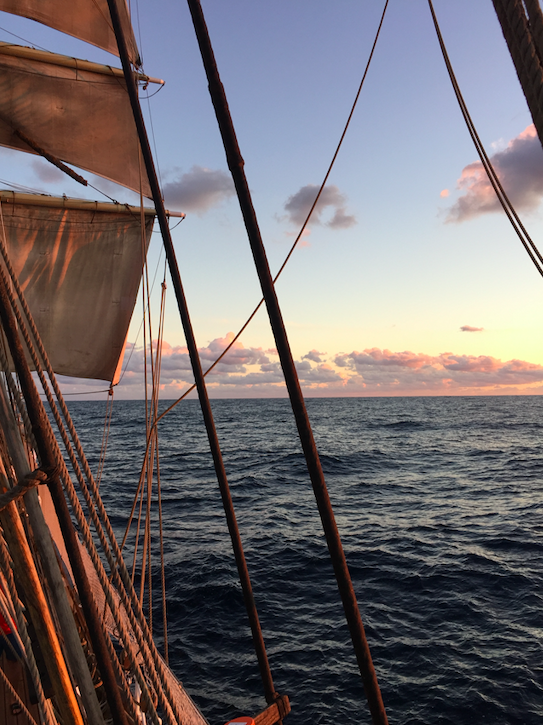 Today started as any normal day when we’re in a harbour, all students and personnel, on deck for the morning information at 7.55.

The plan was to be out of the Miami harbour before the 10 o’clock ‘fika’, and with the help of the local pilots we manged to do just that. We were even able to set most of the sails before 10.

It has been a very rocky start to our passage up to Charleston consisting of wind and seasickness for many, but luckily the sun was shining the entire day. For me, the majority of today consisted of chilling and studying up until half past three. Then the roller-coaster of getting ready for the watch started, sliding back and forth on the floor whilst trying to put on clothes and gear.

All made it up on time and the watch started fairly slow with only one or two ships on the big blue. Even at 5 p.m. the sun was still shining brightly and the temperature was over 25 degrees Celsius. The working crew spent the first part of the watch climbing the rig and sweating away in the heat. Slowly we made it out on the open ocean, with only the horizon surrounding us. The only company we had tonight were a group of dolphins and a few fly-fish.

The wind turned half way through our watch, which meant that we slowly dropped in speed. To avoid starting the engines Oskar, the officer in charge, decided we should make a “ko-vändning”. This may sound really strange for anyone reading this, but it’s actually fairly simple. In theory I might ad.

Basically a “ko-vändning” is like a loop where you steer away from the wind to make it easier to change the direction of the boat. This is possible to do with only one watch but is way simpler with more people on deck. What you need to do is to change the position of all the sails, from example facing starboard to portside or vice versa. Working from the front to the back, the ship will slowly change its course. This went super smooth with the help of the mid-ship watch.

And just like the day, our watch ended with the sun setting in the deep blue ocean.