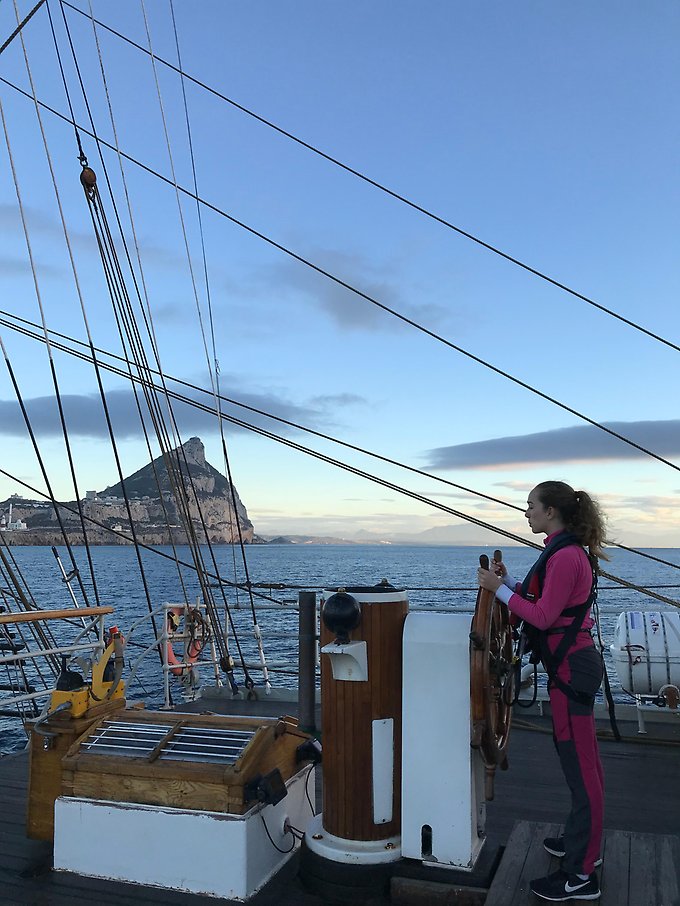 After 1,5 days at sea with a lot of seasickness we finally arrived in the port of Gibraltar. Around 10pm this morning we docked in the center of Gibralatar, around us there’s a lot of big luxurios boats and a big marina. In a distance we can see the rock of Gibraltar and a lot of different apartments. The weather is very good, it’s pretty sunny and around 25 degrees.

Beacause of last night’s watch we woke up at 11.20, which is pretty late. Short thereafter we ate lunch, skipping breakfast. Since we had a birthday on board today we sang for her while we were eating. At 12.30am Midskepps met up at the main deck to begin the portwatch. While we were doing this Styrbord and parts of Babord went to the beach for a beachexamination, which we’re doing on Thursday. While they were on the beach we (Midskepps) began to do some maintenancework in the rig. All of us got diffrent tasks by our watchleader. All of us got a diffrent wires that we were supposed to grease so that they wouldn’t rust. The hardest part about this was to grease the forstay at the front of the boat. Beacuse there’s no shrouds to climb on. So what we hade to do was to climb to the top of the first mast and atach a type of swing, called ”sjömanstol”. After that one person had to sit on while a couple of others slowly released more and more of a rope attached to the ”swing”, so that it moved down slowly. So the person on the ”swing” hade a chance to grease the wire.

While some of us were doing that the rest of us were out on a crude, greasing diffrent wires. By now the most of us are starting to get used to the highets parts of the rig and start to think that it´s way fun to be up there, even if it still is a bit scary. After a quick break with some Choclate cake for the birthday kid we kept going with diffrent tasks until today’s dinner.

After a delicious dinner we were free from work and we hade some time for studying and relaxing on deck. While we we’re waiting for the rest of our friends to get home from town. Most of us are really looking forward to see everyone again, because during the sealegs we don’t get to see each other a lot. Either we sleep or work. In a bit it’s time to go to sleep, because tonight we’re divided into diffrent shifts to look after the boat nightime. We’re also really looking forward to tomorrow’s visit at the two diffrent schools, and of course the coming days in Gibraltar.