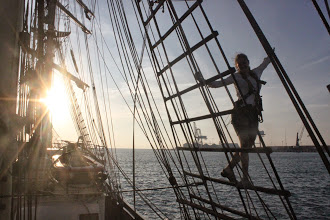 NO SNAILS GOT INJURED DURING THIS DAY

Hello everyone! hope everything good with you guys cause you all know that we’re having a great time at Gunilla. So you probably know that we’ve been in Bermuda since Sunday and heard how it is. The thing you haven’t heard is what I’ve been up to!

Although I’ve always kept on sleeping and then gone up to the morning meeting at 07.55. We’ve been at anchors since yesterday so we took the mini boat (Berit) and there’s always a crew member maneuvering the boat so it’s safe. Anyhow we jumped on the boat at 08.30 and had planned to explore Bermuda by moped but the others wanted to rent a sailboat….. So me, Vincent and Arvid got stuck at the town center but decided that we would rent mopeds anyway. You guys wanna know something real fun? Apparently you have to be 18 to rent a 50cc moped……So we had to take the bus which was just amazing but it worked.

We arrived at Hamilton around 11 and bought some KFC to take with us to the cliffs. Walking from Hamilton to the cliffs took 20mins because we took a wrong turn but I saved us some cash so guess it was worth it? When we arrived we crossed paths with some familiar faces. They recommended where we should jump and how to get up so nothing would be unclear when we eventually jumped in. The KFC bucket filled us up so we then could return to the sea. I had my snorkeling mask that made me look like an alien plus now afterwards I’ve gotten a really appreciated tan line. I snorkeled around and saw some fish and suddenly I spotted something that looked like a pot but it was 4 meters to the sand floor. I decided to dive and man that was a mistake cause it turns out it was trash! My ears exploded for nothing so I resurfaced and had to rest my ears from the intense pressure. After that we walked to the part of the beach were the highest cliffs were and it tickled your spine whilst you looked down. The only problem was that it looked kind of shallow so we did a caveman experiment. We threw a branch from a dead tree to see if it would stick on to the sand and it did he-he. The depth was about 2-3 meters deep so i couldn’t jump but Vincent and Arvid did. Whilst they were jumping I explored the cave below and I saw a moped on the sand bottom that someone had thrown from the highest point into the ocean.

The day ended with a ”grillkväll” that everyone attended. We played some games and ate some hotdogs and it was a lot of fun. However me and Erik explored the cliffs around the fort that was located alongside the beach and we found beautiful seashell but they already had life in them. I walked around and found a lot of beautiful shells while Erik disappeared for a couple of minutes. When he came back he had found a coral rock that he wanted to give to his mother as a present. The sad thing is that he got mad at a snail and threw it into the sea but the fun thing is that when he threw it he also threw his stone away. While Erik was mourning over his loss I worked on getting the irritating snail out of my beautiful shell. When it was time to head back we took 6 shells with us but they had snails in them. To Be Continued

We had 50 minuets of free time after the beach so me and some friends bought some delicious frozen yogurt and free wi-fi whilst waiting on Berit to bring us back to the boat. The boat arrived at 21.55 and took us back to Gunilla.

We got back around 22.15 and then my second chef gave me advice how to get the snails out from the shells and that was by putting them in boiling water and then let them dry and then the snail would fall out. So I took my snails and placed them in the bucket and filled it with boiling water so they died and now i’ll have to wait a couple of days until my shells are completed but it will be fine.