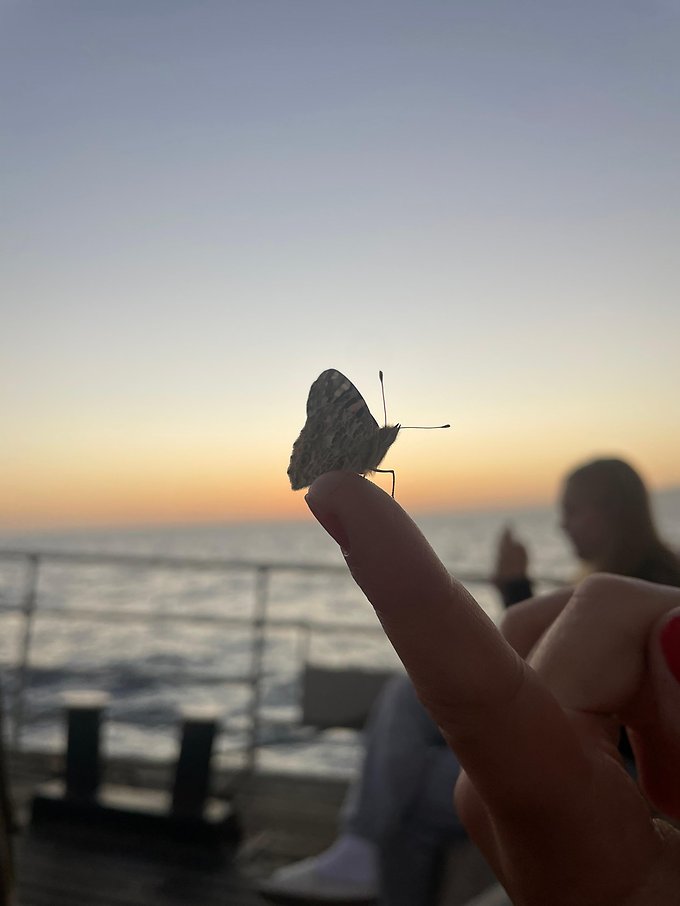 The day started just as any other day at sea, I got up at 3:30 AM for my 4-8 watch. It was a pretty decent time except the fact that I got soaked when a wave crashed into the ship at the same time as we were furling the sail (möglet).

When we got off our watch and the sun was just coming up I tried to get some sleep but after trying for half an hour I instead laid on ”backen” sunbathing and reading. Later at 12:00 o’clock it was time for lunch and on todays menu: moussaka! After a delicous meal we started our lessons for the day which was free studies and swedish. I started my ergonomics assignment in PE that was about stalking another person on the ship and write about different working conditions they are exposed to. When I was done with my assignment we had a book circle where we talked about our swedish book turn home (vända hem) by yaa gyasi.

At 4 PM the second watch started and it was going to be an interesting one. I was postguard (lifebuoywatch, lookout and helmsman). It started pretty slow and nothing really happened. I learnt how to steer the ship and what to do if somebody falls over the gunnel also known as Man Over Board. The intresting stuff started when I was lookout, I saw a round brown spot floating towards me. When it got closer I saw a head poking out in the front of it, what I was seeing was a giant turtle floating beside the ship. I shouted to a group of people that quickly went to the gunnel to see the animal for themself. 5 minutes later I showed my friend that accounpanied me where I saw the turtle and suddenly he shouted something and pointed at a gray shape with a hammer like head under the water surface. It was a hammershark, apperently it’s really rare to see one close to the surface as they usually live in deeper waters. Thats the reason why our commading officer didn’t belive us. That watch I also saw flyingfish, dolphins, lots of seabirds and ”sea fire”. That was it for me today see ya.