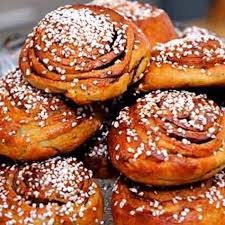 On this specific monday it was my turn to be in the kitchen as a backis with my friend Viktor P. Last time I was a backis the weather were not so good and the ship rolled like hell and it wasn't that fun being in there when you are trying not to fall because the waves was a little too big.

But this time it was all good on the sea. Calm weather and the sun was shining. As I said the last was very very stressful but not this time, we had a fine day in there and we got the honor to be serving mango as our fika at 3. It was of course very appreciated by everyone who was there.

I have the 12-4 watch, and we went on at lunch so first thing we got to do was serving people the lunch, it was chickenwook. After that we got a little cleaning done and made it all nice and fresh in the kitchen. Then we had to prepare sallad, potatoes and other stuff for the dinner. The four hours in there went very fast, and I really like being in there with Åke and Sandra, they make it easy and fun being there.

Went off at 4 and then Berra and Vidner took over in there and I went down and took a shower. Then I didn't really do much stuff.. sometimes there's not so much to do on the boat after a couple days at sea. I was hanging around some and listening to music or something unnecessary like that.

Tried to get some sleep before I walk on again at 12, but then the 8-12 watch had some kind of "Piratfeast" and we all gathered on maindeck at 22 and it was music and popcorn and stuff, it was “mediokert” and then my sleep was gone before my watch. Then I went on and we got our cleaningduties done and made some more salad for the lunch the day after.

We had heard some rumours about us making some chokladbollar but no, Åke said it was enough with the ice tea and popcorn that we got at 22. And that's understandable by me.