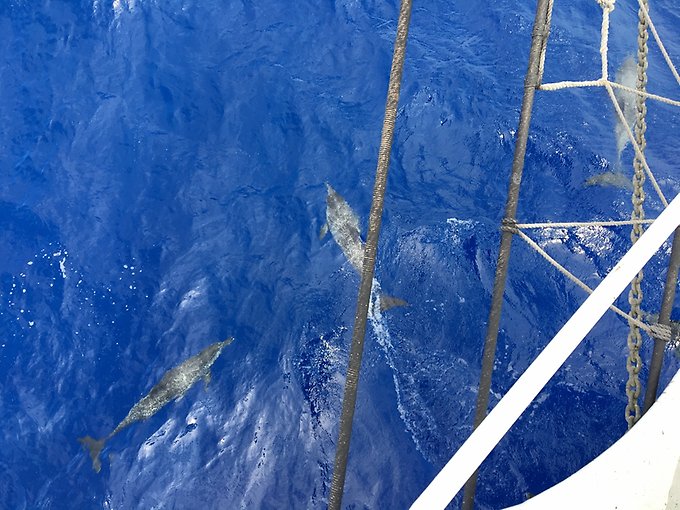 May the odds be ever in your favor

After a cosy night watch, watching both moonset and sunrise between the hard work, we went off and went to sleep a few hours before lunch. Later on, we as always had classes. I chose to study outside, which was a choice I didn’t regret when 15 dolphins showed up, delivered a beautiful show. Today the murder games also begun, making the whole ship tipping on their toes.

After whats always feels like way to less sleep, my watch stood ready at 03.55 for watch change. We in the working force started of setting some sails before ”nattfika”, which today was hot chocolate with sandwich. Afterwords, we watched the moonrise before practice at taking down the sails, so we will know how to act if it suddenly starts to blow very much. We later on watched the sunrise, set all of the sails we just took down and cleaned deck.

After the watch, we ate breakfast, then most of us went to sleep. When we woke up it was time for lunch, which today was a very delicious greek salad. After we had classes and I chose to study outside in the sun. The outlooked suddenly said, ”Wilma, look! There is a shark or something” I get up and look out to the blue ocean. ”No, sorry it was only dolphins, so sad” he continues. Which pretty much describes how cool most of us think dolphins are, it's not that big of a deal as in the beginning. This time was very cool though, is was about 15 who played at the front of the ship.

As I wrote before, the murder games begun today. Our first victim, Alexander, was brutally killed by a knife in the big mess. For you who don´t know what the murder games is about, it's a something most people who sail at Gunilla plays. All students and the ones in the crew who wants to join, gets a person who you shall give a certain object to at a special place. So now everyone is on their toes, not accepting even a glas of water in the little mess where we eat at sea, thinking it’s their killer trying to murder you.

On the afternoon, after more ”fika” we went on watch, noting really special happened, but we saw a beautiful sunset and started a competition of who can make the best map over all of the ropes, and that is a lot of ropes.

Now I´m in the big mess watching Batman with some people, I´m soon about to join the rest of my watch and go sleeping.