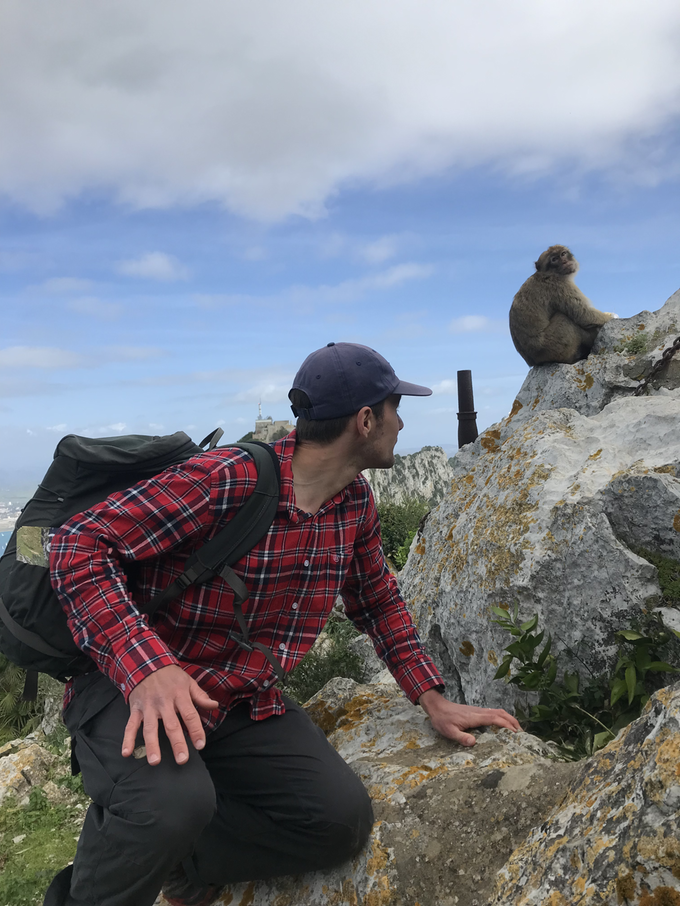 I was woken up at 7 AM the 2nd of April, just as tired as the rest of the world. The fatigue from a whole day of mistrust and pranks the day before was overbearing and it wasn’t exactly with ease that I climbed out of my cot. It wasn’t any usual day I was waking up to - it was the day of our hike up the Rock of Gibraltar!

We packed our lunchbags, filled our water bottles, tied our shoes and headed out tired but exhilarated. We walked from the boat outside of La Linea, to the border over to the British Territory of Gibraltar. We continued our walk all the way up to the entrance of the Nature reserve where the Rock of Gibraltar lies. The north entrance is located right beside the medieval Moorish Castle, and seemed like a perfect place to stop for the mandatory 10 o’ clock fika. We were already sweaty, and that wasn’t about the change for a while. Still, we hadn’t yet begun our actual hike up the mountain, just to it! After the very much needed pit stop we continued up the mountain and in to the Great Siege Tunnels - a tunnel system through the Rock that were used as a defense system during the American Revolutionary War. The hike soon continued and after walking through tougher, although gorgeously flourishing, terrain for a while we met the famous Barbary macaques - the monkeys of Gibraltar! They were unpredictable, fast and stealthy thieves that were quite easily agitated, but they were also adorable. After a few minutes they had already managed getting into a fight and stealing our teacher Erling’s water bottle. Bitter and frightened, we continued hiking upwards and eventually reached the Skywalk at the top of the mountain. The view was terrific! Every direction you looked, the scenery was even more breathtaking. After taking in the view we decided to break for lunch and sat down on the mountainside. As Erling was packing up his things he placed his sandwich down and within a second one of the stealthy monkeys leaped to steal his food! Erling had now been robbed twice by the monkeys and was yelling at the thief in an aggressive tone, hiding the palpable chock and disappointment of loosing his lunch. Out of pity he got half the sandwiches of two students and sat bitterly next to the monkey as we, and the monkey, continued eating. The finale was far from disappointing and consisted of a scenic hike down the never-ending Mediterranean Steps facing the coast of Morocco and Ceuta.

Our legs where aching as we hiked down the mountain and exited the nature reserve and when the first café appeared as we reached the city we sat down in or stiff wooden chairs as if they were big fluffy beds and stayed there until closing time. We walked back to the boat to shower, eat dinner and change, and quickly headed back into the city. Me and a few friends sat down at a British pub that we had scoped out earlier that day as the sign disclosed that Saturday night was Karaoke night. The bartender laughed in our faces for ordering alcohol-free beers and we, young girls with summery skirts, stuck out like sore thumbs in the extremely stereotypically rugged British pub. We didn’t have much time but managed to play cards, drink our beers and sing ABBAs Does Your Mother Know, so I’d say that we made use of the short time that we had! We jogged back to the boat with heavy boots right as the clock struck 10 PM (curfew). Metaphorically as we didn’t get to enjoy the whole of the karaoke night, and literally as our legs were aching from a total walk of 25 km throughout the day. Need I say that it didn’t take long to fall asleep?