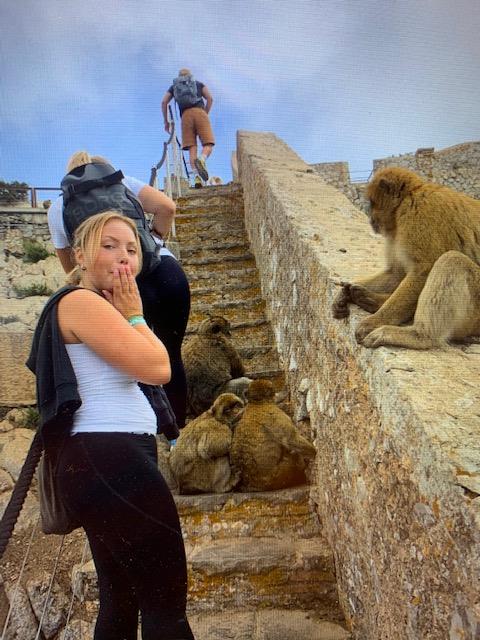 Hiking, getting assaulted by monkeys - the true Gibraltar experience!

This day started just as so many other, someone woke us up for breakfast and everyone in cabin eight struggled to crawl out of our slumber. This day started as many others, except for the fact that we had to wake up one hour earlier than usual since our bus to Gibraltar would depart at 07:30 sharp. With pillow
marks on our cheeks and heavy eyelids, we made our way through the corridors. Not to my surprise, someone was complaining about the toilets being clogged, again. An often occurring problem nowadays where Hasse, the boats engineer, is working past overtime.

Anyhow, after a filling breakfast, stressful packing and clothing choices we sat in the bus. It didn’t take long until I and everyone else on the bus were fast asleep, some sleeping better than others. Stickan who was sitting across the isle snored loudly the whole three hour ride and exclaimed, very pleased, how great he had slept when we stepped out of the bus.

The cliff of Gibraltar towered over us, much bigger than I had anticipated. It was harder than you’d think to find the actual entrance to the routes, but after asking around and searching on the internet we began our climb. Before we even got close to the nature reserve we struggled getting up the many stairs. I would
compare it to climbing up the mast, without the mast ever stopping. Already sweating rivers and with three layers of clothes in the bag, we got to the entrance, paid the entrance fee and decided to take the Nature lover
path, expecting some stunning views and diverse nature.

To our disappointment, we got neither on the Nature lover path. We walked for forty minutes on a dusty road with dead bushes surrounding us. After a short lunch break in our hike, we continued our climb and to our delight, there were more stairs!! While legs and lungs were burning we saw our first monkeys. There were so many in different sizes and there were even baby monkeys, clinging to their mothers. When we got to the very top of the cliff we met up with some friends, and they told us that Signe had been jumped by a monkey. The monkey had jumped on her back, zipped up her bag and started digging for something to eat. Someone had recorded it and it was hilarious. After that we decided to throw in the towel and took a different path down the mountain called Mediterranean steps which was beautiful.

All in all it was a great day, now I’m very excited to finally set sails and head for Las Palmas.
Thea Enander
BRABORD