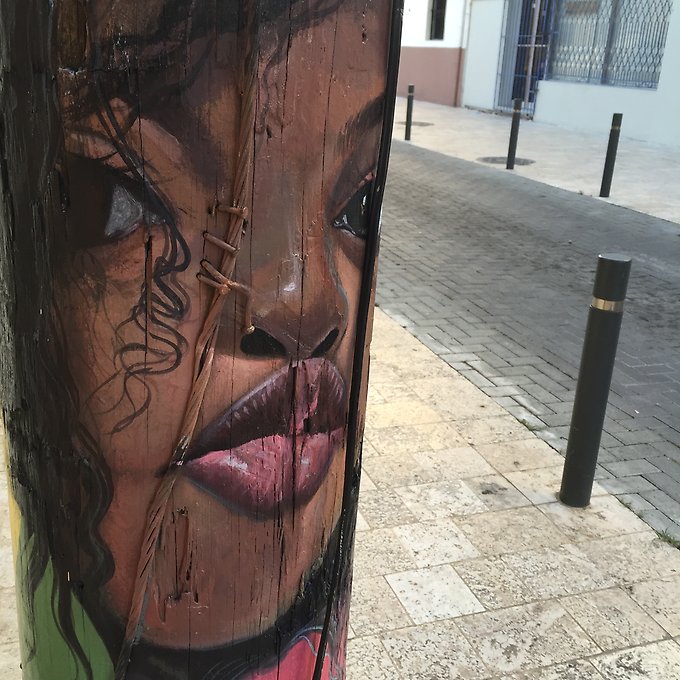 Twelve godforsaken days left until we leave. I long for home like a lost man longs for a compass and map. It’s almost unbearable.

Today is the last day in Santo Domingo, before we leave for Miami, and since I was free of guarding the boat (it’s a ship!), some friends and I decided to head out into the town. Since most of us were dead tired, we decided to treat ourselves with a little lay-in before we headed out. When the clock had struck ten we thought it was high time to move our lazy arses from our births, and out into the town.

Our plan for the day was to wander about, and try finding a cosy place where we could have lunch, and then try to get to Chinatown. The part of wandering about we managed gallantly, we moved with grace along the tourist street, and got attacked at every crossing by someone yelling “Taxi! Taxi!”. Then the part of finding cosy place we led a brutal failure, I must say. We ate at Pizza Hut. Of all the places, we could have chosen, we chose Pizza Hut. Oh well, I’ve had worse meals in my life, but it was still quite dull eating at Pizza Hut. I ordered a peperoni pizza with a lot of mozzarella cheese, and a Coke, and got completely robbed. I paid 800 pesos’, which is exactly 152,64 Swedish crowns. For that amount I should have gotten ten times the quality. The peperoni were *bleurgh* (sound of displeasure), the pizza was entirely too greasy, and you could have mistaken my Coke for water! The worst part is that it wasn’t even supposed to cost 800 pesos’, it was supposed to cost 600, but the greedy bastards added 200 pesos’ as a tip. A tip is not something that a restaurant just takes, it is something that I, the all-powerful costumer, gracefully gives if I was pleased with my meal, which I was bloody well not!

Now that I have vented a bit, I can tell of our truly disappointing trip to Chinatown. We didn’t know where it was, so we had to ask people on the street for directions, people that hardly could any English at all. Luckily, my companions knew enough Spanish to get by, and we finally arrived at Chinatown. Which was, as I said earlier, a total disappointment. I had imagined cool little stores, with cute little souvenirs, and just a few big markets that sold a little bit of everything and then some. But that was all we stumbled upon, and everything was Chinese crap quality, naturally. We saw some lonely restaurants, that had seen brighter days. But it wasn’t all just for nothing, my companions found some rather bizarre hats, that they now with glee runs around with, strapped to their heads.

Now, the day had a redeeming feature; our farewell dinner of Santo Domingo. We went to a place called Alegro? Or maybe it was Alengro? Or was it Anengo? I can’t for the life of me remember. Anyway, there I ordered a risotto with mussels, clams, and octopus. And the only thing I can say is a Swedish saying, directly translated to English: Pizza Hut, throw yourself into the wall. It was a really good risotto, although, the mussels were quite dry and boring, but everything else was just ... perfection. And my Coke didn’t taste of water, it tasted exactly the way it was supposed to do.

I’ll keep counting the days until our departure, with nevertiring abandon (nevertiring is a word, and if it isn’t, then I just made it one).

I believe that’s all for me, now I’ll be crashing into my berth, dreaming of my bed back home. Good night, sleep tight, and don’t let the bed bugs bite.