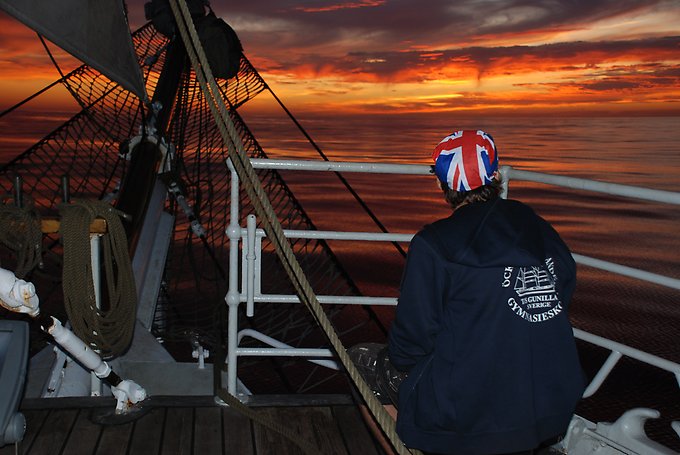 Tonight at our night watch, some really weird things happened. It was just a normal night for us in the 12-4 watch until it suddenly started to rain.

In Caribbean, there is a phenomenon called squals with rain heavy small clouds that can bring local storms, hurricanes or stronger winds at sea. And today we met our first one, but luckily it was really small. We really quickly had to dowse the upper square sails in the both masts. It was really nerve-wracking, but we managed to get the sails down.

After the stressful maneuver, I had to go to the bathroom. When I got back up on deck there was a tense feeling among my classmates once again. My friend looked at me with scared eyes and told me “There is a Tsunami”. I freaked out, and waited for them to tell me it was a joke. But it wasn’t a joke. They told me that there has been an earthquake outside Honduras and that it will surely develop into a Tsunami. Even though Honduras is pretty close to Grenada were we are going next, it won´t affect us because we’re at sea.

The weird things that happened tonight don’t stop there. When we were on our way to go to sleep we felt an extreme hotness under deck. The air condition system had broken, so we had to open all the doors that lead outside and to our cabins. Then we went to sleep in an ocean of sweat.

This is what can happen on a normal night at Gunilla, and I must say it is really exiting not knowing at all what will happen next.