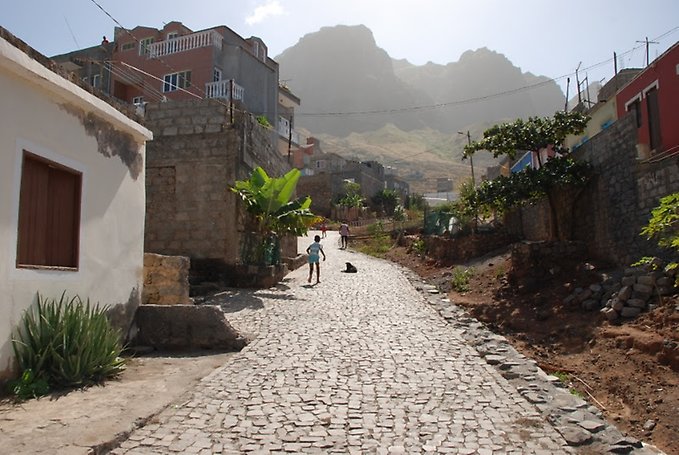 No stress in Mindelo

Today it has been one of those days that I know I am going to remember. We have been on Cabo Verde, in Mindelo, for a few days now but today it was the first free day for me.

After breakfast and the morning formation me and two other students went out to discover the city of Mindelo. I really like the vibe here, it is soothing. We found a supermarket and bought something to drink. After that we found a café which happened to have both ice-cream and Wi-Fi. We got something to eat and later went to the beach just to see how it looked. We had no plan to swim, so we didn´t bring any bathing suits. But when we touched the water, our urge to swim became to strong to resist, so we jumped in with all our clothes on. We later regretted this when we had sand everywhere in our clothes and had to strip down to our underwear and rinse ourselves of on deck.

After the sand was gone, our guests arrived. Today was the day a group of students from the nearby school Jorge Barbossa came to visit. We had prepared a traditional Swedish “Fika” in the from of chocolate balls. We gave the students tours around the ship and it was very pleasant, but my favorite part was later on when we got to visit their school, we also got tours and got to see an amazing performance by the school quire and more. After that we got to taste some traditional snacks from Cabo Verde. Later on, we had a football match, school versus school and we also played a frisbee type of game. I had loads of fun, but my absolute favorite part was when I got to sing with the school choir after almost everyone else had gone back to the ship. We sat down in a circle with a guitar and started singing, it was magical. Everyone was extremely talented and then again this soothing vibe came to me again, and as they say here “no stress”.

We finished the evening with some crepes and returned home.