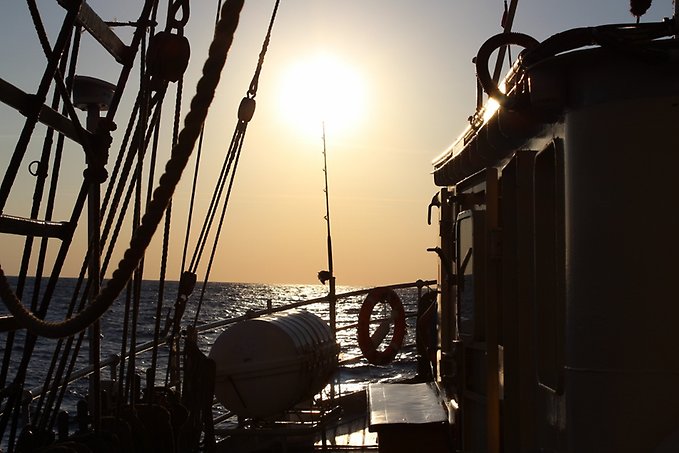 One fourteenth of a day

To recall the events of a specific day is a tad more difficult than it may seem, because on board, in the middle of the Atlantic Ocean, there are no specific days. There is just one, and it is 336 hours long, the fourteen days it takes to sail from Bermuda to the Azores.

Does the day begin in the middle of the night when you wake up to keep the boat from falling apart? Does it start at the break of dawn? Or does it perhaps end when you go back to hibernation at 8 AM after your watch. Does it then restart when you wake up and make your way out of your comfortable and cosy hut to go outside and absorb the view of a vast dark blue rolling ocean and a never-ending horizon, on this great adventure? Just kidding, that doesn’t happen, unfortunately we have got classes.

The point I’m trying to make is that when ordered to write a blog about a certain day, it may very well turn out to be a blog about several ones, or none, or half of one and half of another. We’ll see.

I do know that I woke up at 3.30 AM. I know this because I wake up every time the hour strikes 3.30 during this fourteen day long day. How I wake up is always a mystery to me because consciousness is something that smacks me like a brick wall after a few minutes of being so called “awake”, instead of easing into me when my eyelids open and slowly making me alert of my surroundings. Eventually I managed to drag my lazy, sleep deprived ass out of bed anyway, only to slowly realize that I’d greatly overestimated the time I had to get ready for the night watch. I hurryingly scrambled through clothes, putting on unmatching socks and a shirt that could be classed as not clean. What I was yet blissfully unaware of was that I was already late to the line-up. Although, what was blissful once it was made aware to me was that I was not the only one being late. It may sound like tardiness is the norm, but in fact it is a surprisingly rare phenomenon.

After a collective reprimand an uneventful watch began. My eyelids were heavy, and then the clock turned 05.00, and they were suddenly light as feathers. Why? Because fika. A fifteen-minute blessing from above to still the insatiable surge for a sandwich or smoothie or whatever was served during this divine quarter of an hour.

Without further ado, three more hours passed and the watch ended. Back to hibernation it was.

I woke up, tired as usual. I ate lunch, as did the rest of Midskepps. We had class, during which I happily wasted my time meant for studies playing “gursch”, although somewhere in the back of my mind there was a hint of knowledge that the unfinished chemistry report would come back, and it would come swinging. Then we had watch again.

Did a new day start now that another watch began at 4 PM? Nevertheless, time kept moving, and today the moving of time was more tangible and hauntingly slow than usual. On account of the fact that I was post today, meaning I was bound to spend the following four hours looking at an empty horizon, it felt a bit like time was losing a drag race to a tortoise.

By now, you may or may not ask yourself the question; what is the worst way to spend this time? The answer I can tell you, is to sing “En elefant balanserade, på en liten spindeltråd, det tyckte den var så intressant så den gick och hämtade en annan elefant”. Needless to say, the song continues with two elephants, then three and so on. As I stood staring at nothing at all, I sang this quietly to myself. I sang about one elephant, then two. A while went and then I sang about 401 elephants. Now I decided to shut up and prevent myself from slipping into madness.

The watch ended and perhaps the day did the same, or perhaps it was now it begun. I made my way down from deck, took a wonderful shower, and then I went to bed, completing this fourteenth of a day.