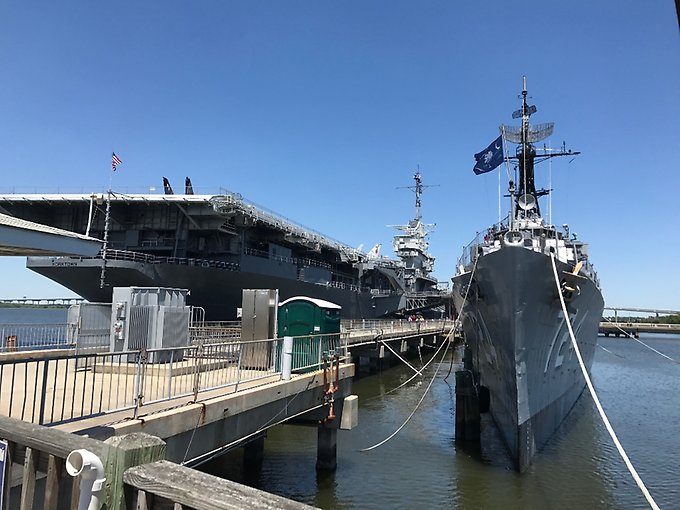 Patriots Point is a huge history place of the American soldiers that fought in the WW2 and the Vietnam war.

Today was a good day. We seafarers have been busy all day.

We woke up and ate some breakfast as usual. Then we got ready to go to the pilotstation here in Charleston. When we got there we were showed around and they gave us hats, some really nice hats! After the guided tour on the station we went back to Gunilla and ate some lunch, Swedish falukorv.

Around one o’clock Jonatan took us to the Patriots Point, we went there by water taxi.

Patriots Point is a huge history place of the American soldiers that fought in the WW2 and the Vietnam war.

First when we got there we went into the big hangar ship which is called Yorktown. Inside the ship we went to four different tours that showed how the crew lived and how everything worked. We saw big cannons and other types of weapons. My favorite part was were the planes landed.

Another ship we saw was Laffey, ”the ship that would not die”. Laffey made it through an attack with five kamikaze planes and three bombs, but she still would not sink.

We kept on going through the area then we came to the Vietnam park. In the park you got to understand how the soldiers lived and what they did to survive.

After the trip to Patriots Point we headed back home and ate some tacos to celebrate Alice, our watch leader´s birthday.

Now we are sitting in the ”big mess” and just relaxing. Tomorrow is my turn to work on the boat so I will soon go to sleep.

Hope you all at home are feeling well, and I will soon be back with my swedish blog.