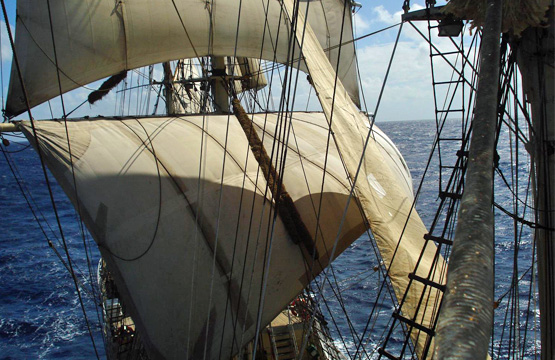 Rainbow in the dark

Today we went up at 03:30 to start our shift on Gunilla. On deck it was very dark and it was hard to see what we were doing.

After a while our eyes started to get used to the darkness but it still was hard to see who the person next to you was. It was very warm but it did rain slightly. The sails were already put up but the wind faded and the motor was turned on, but we hoped for the wind to come back so we didn’t take down any sails.

After about a half hour the wind began to pick up in strength again and we had great sailing with speeds up to about seven knots. We also got to witness a beautiful sunrise and it was nice to be able to see again. During our four hours on deck we never saw land, we only saw one single boat, when the clock was eight we were served porridge in the little mess and it tasted delicious, we also got eggs, bred and tee.

After the breakfast we all went down to our cabins to get some sleep. We got up again at twelve a clock to eat lunch, and after that the lessons at the big mess started. At three a clock we got huge cinnamon buns tat tasted great and then we dressed up for the four to eight shift. Me and a friend worked in the kitchen where we served lasagna and washed all the dishes.

The best thing with the 4-8 guard is that we get to see all the beautiful sunsets and today it was extra beautiful.