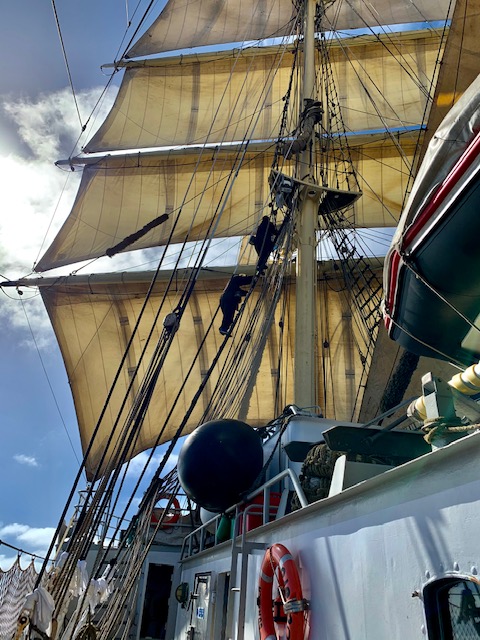 This morning I woke up really excited for my watch day since I was going to be allowed to work again. I had been restricted from using my hands in any way that could disturb the healing of the blisters on my fingers, and now, finally I would be able to work like normal again.

A couple of days earlier me and my watch were out on the deck working as usual when a big wind hit us. We got orders to take down the sails up front of the boat. The whole watch hurried to their positions and the watchleader gave us the order to start dowsing a sail. We started hauling the ropes and the sail slowly started going down. When the wind caught on to the sail and it flew upwards the ropes followed the movements of the sail. I made a mistake and held on to the halyard of the sail, but when I realised what had happened it was a bit too late. The rope got dragged upwards by the force and my hand got burned badly by the friction the force created.

When the sail was down my hand got taken care of and I walked around with a layer of multiple band-aids for a couple of days that felt like an eternity. I was told that I was going to be allowed to work like
normal today but when I arrived on deck for my watch I was told that I couldn’t work as usual since the burn had not healed yet. It seemed like there was some type of miscommunications between the medical attendant and the commanders and it made me a bit frustrated and disappointed. Keeping myself in a good mood has been quite difficult since my sleeping schedule got messed up when we switched watch hours a couple of days ago. And when they told me we were going to be cleaning my mood did not get any better.

Half of the watch got to climb up in the rig to put tar on the wires and the rest, including me, got to clean the roof of the caboose. It was actually quite fun to clean since me and my friend were making jokes the whole time. After about two hours and me almost falling of the roof multiple times our watchleader told me that she needed to do a test run on the new rescuing equipment for the rig. We climbed up to the bram and I was told to jump off the yard that carries the Bram.

When I stepped off the yard I felt a small rush of adrenaline and then came the shock of the harness catching me. The harness tightened around my legs and I started to understand that the commanders meant what they said when we asked if we could do a "test fall" in our harnesses on deck. “Do not fall off the yard, the harness will hurt after a while” they said. As I was dangling around in the air, looking at the amazing view, my watchleader set up the equipment. She yelled “rope on deck” and everyone below us quickly moved aside before she threw down the line we were going to use to get down. We went down the line slowly and everything was fine until we had about five meters left to deck. A second passedand fell down quickly. The sudden movement made me yell out of surprise and then the fall was over. The look on my watchleaders face told me that this was not on purpose, as I thought it was. I think some type of safety break had kicked in and stopped the fall. We slowly went down the last couple of meters and got down safely. When we hit deck and the pressure from my body weight on the harness was released I could feel a quick uncomfortable pain that slowly wore off as my blood flowed backinto my legs. Later I would discover that the pressure had given me red marks across my thighs.

My watchleader spoke to the second mate about doing a check to find out what was wrong with the equipment. They seemed quite worried, but decided to handle the problem after our watch since we had quite a lot to do. I got sent back to the roof of the caboose where my friends were as confused and spooked as me, but we continued cleaning and since everyone knew we were alright the jokes and laughs continued for the rest of the day as if nothing happened.