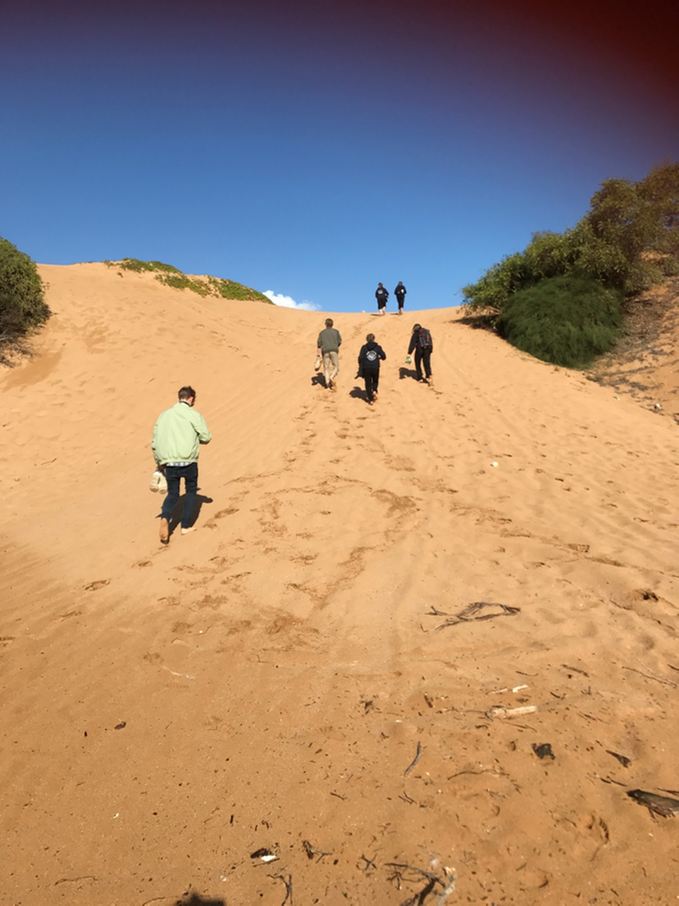 We have now been in Safi, Morocco for five days and we have been seeing and doing a lot, so today we wanted to discover more. Me and my friends who also had freetime looked at a map over Morocco and chosed to travel to a city with a funny name. Olalumpa or something was the name of the city we were about to explore.

We went to a parking lot in Safi where they had the grand taxis (taxis for up to seven people). After one-hour long road trip we ca to a whole new city with a whole new atmosphere. Since we didn’t know anything about this town we just started walking around. Everyone we met there were so nice and we stopped multiple times on our way just to talk to people who wanted to know all about us and our country.

Finally, we ended up in a desert close to the beach. The waves were huge and it were so fun to run around and play in the waves. That was when it hit us that the clock was just 11 o’clock. Around this time at home I would still be sleeping and now we had already taken a taxi to a city we knew nothing about, seen flamingos, climbed in the dessert and best of all, we bought super tasty bread for one dirham! (it takes approximately ten dirhams to one euro). And then we talked about what our friends were doing back in Sweden, probably freezing and taking some test, probably math test.

We were still a bit wet from the sea so we continued to walk in the hot dessert in belief that we would dry faster. On the top of a cliff we found a little house. Outside of the house it stood two militaries in green outfits. After small talking with them for a while we found out that the little house was a marine military base. While talking to the friendly militaries there was another man coming up to us. The man apparently owned a restaurant there. Looking around confused we really couldn’t see anything that looked like a restaurant there. So where was his restaurant? The mysterious man took my arm and lead us to a table were a couple sat and ate. One lonely table just five meters from the militaries. “I can get another table for you to? I have shellfish”. Since I’m a vegetarian I said thanks, but no thanks. We went instead on a restaurant close to the beach and ate lunch. Before we got home we took a look at the market and bought some fruit.

On the road trip home, we ate fruit with sunburned cheeks and talked about how fun we have had today. I didn’t join the conversation since I were asleep the whole bumpy ride home.